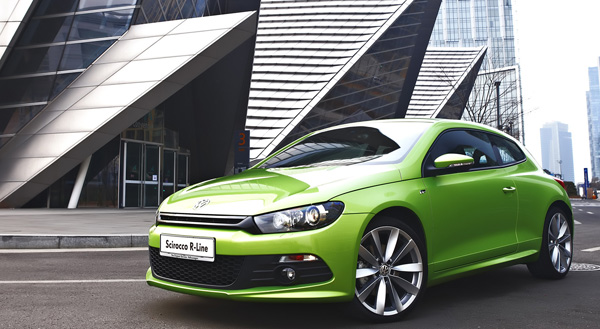 Volkswagen prides itself on churning out affordable sports cars, and for 42 million won ($36,800) there are few black marks for the low-profile Scirocco R-Line, a slick design upgrade of the best-selling coupe that thrills like a ninja turtle in sport mode but overly errs on the side of caution in regular drive at low rpm to conserve fuel.

But don’t be fooled: This evolution of the GT model is ultra-responsive once you’ve dispensed with sensible fuel economy and flicked into sport. The faster gear changes facilitated by the dual-transmission six-speed DSG gearbox make racing around city traffic a hedonistic experience. They also make rocketing from zero to 100 kilometers per hour (zero to 62 miles per hour) in 8.1 seconds on the back of its 2-liter diesel TDI engine a guilty pleasure that can be safely enjoyed even in blizzard-like conditions on the cable-stayed Incheon Bridge.

After test-driving a metallic green R-Line on a recent rain-swept weekend in Seoul, I went from viewing it as a tiny terrapin to an amphibious sensei of the automotive arts. Almost in defiance of its front-wheel drive status, the wheel traction was shockingly good and refused to aquaplane when pressed. It seemed clamped to the road, even when the road looked more like a swimming pool. 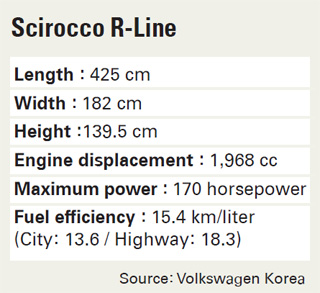 Given its restraints - a maximum output of 170 brake horsepower at 4,200 rpm - boy racers will still rank it a notch below the Golf GTI, which also channels its power through its front wheels. Others may prefer the practical functionality of the chunkier Golf R with its all-wheel drive option.

But the added elegance of the R-Line trim - VW has been adding these upgrades to its catalog since last year - and the competitive price tag help keep this model abreast of the sport coupe pack.

The engine is such that you have quarries of torque at your disposal even at low speeds, peaking at 35.7 kilogram-meters just above and below 2,000 rpm. The windows won’t rattle at 190 kilometers per hour - but I’m still baffled by the decision to have them automatically open to let rain in when the engine fires up - and the power-steering remains a joy to work with even when the afterburners kick in.

The driving seat puts you close to the ground but the suspension is not racing-tuned like in the R model, so comfort levels are only compromised when ripping over big potholes. But manually pumping the seat higher seems a bit retro in an automated age.

The original Scirocco was launched in Europe in 1974. The third generation came out in 2008 and the R-Line trim became available in Korea on Feb. 6, with around 200 units of the latter sold or ordered as of mid-April, according to VW Korea.

The sleek new look satisfies the ninja within courtesy of its razor-sharp rear side windows, integrated roof spoiler and branded leather seats and steering wheel, not to mention its 19-inch Lugano alloys and exquisite side profile. For those lacking supernatural stealth, sat-nav is not only standard but the best I’ve seen here among Korean-language systems. Cabin space also seemed fine, and the back seats can flip down to accommodate more cargo.

On the flip side, rear passengers complained of feeling claustrophobic due to the tiny windows and lack of a sunroof, and visibility for rear maneuvering remains an issue. Families have no chance of squeezing three kids in the back - I tried.

There is also something split-personality about both the R-Line’s design - its bulging butt starts to resemble J. Lo’s after a while - and “viper green” (one of about seven colors offered in Korea) shade, which is resplendent in sunlight but gaudy when bathed in neon.

Also lacking in the model I drove was the Scirocco’s highly touted dynamic chassis control (optional) and, more pedantically, a USB port. The RNS 510 Infotainment System boasts a 30-gigabyte hard disk and SD card slot, in-dash CD and DVD player and DMB, but Bluetooth must have been at the dentist’s during our date because it never connected. This would be more bearable in the U.K. but less so in a country where ajummas belting out trot songs rule the airwaves.