Defector to read poems about North in London

Defector to read poems about North in London 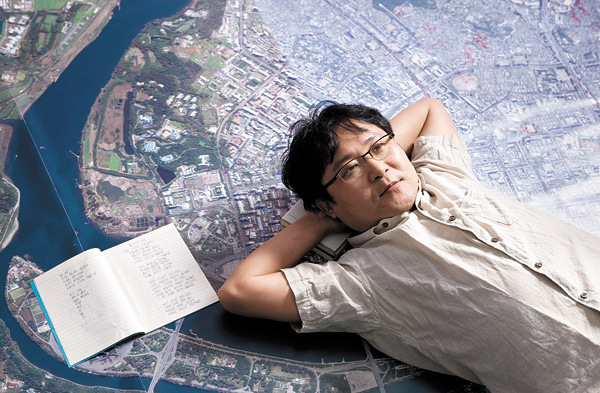 Poet Jang Jin-seong lies down on the satellite-view map of Pyongyang in his office in Nonhyun-dong, southern Seoul, on April 3. The notebook next to him contains poems he brought with him when he left North Korea. By Kwon Hyuk-jae


London will be hosting a festival called the Poetry Parnassus from June 26 to July 1. Poets representing the 204 countries participating in the 30th Summer Olympic Games in London will take part in the festival.

North Korea is one of the participants of the 2012 London Olympics. However, North Korea will not be participating in the festival, as the country does not have pure literature.

Instead, the organizing committee of the festival has invited Jang Jin-seong, a 41-year-old North Korean defector, as a representative poet of North Korea. The British press, including the BBC and The Guardian, have shown interest by saying, “An official poet of Kim Jong-il is coming.”

Jang left North Korea in 2004. After settling in South Korea, he published a collection of poems titled “Selling My Daughter for One Hundred Won.” He currently is the representative of New Focus, a specialized newspaper focusing on North Korea.

Jang said, “I intend to inform the poets of the world of North Korean human rights issues while in London. I will be launching a poetry rocket targeting Pyongyang.”

After this recognition, Jang became a reporter for the Korean Central News Agency (KCNA) in 1994. Starting from 1996, Jang worked as a poet affiliated with the North Korean Workers’ Party. He was in charge of anti-South Korean propaganda.

Instead of using his given birth name, he chose to use the name Kim Kyung-min while working as a poet in North Korea. This name is well known in South Korea as it is a popular poet’s name.

The poem “There is Spring Above the Gunstock of a Warrant” that was published in the North Korean newspaper became well known. This particular poem was highly praised by Kim Jong-il, who called it “a great poem exemplary of the songun era,” which refers to the North’s military-first ideology.

“A lot of poems that were popular among North Korean colleges then were pieces written by poets working for the North Korean Workers’ Party. When I met Kim Jong-il twice in 1999, he frequently cried. Despite the power he possessed, he was a lonely person.”

While working for the North Korean Workers’ Party, Jang became well aware of details of the situation in South Korea. Jang educated himself with South Korean media and books. “I also studied the JoongAng Ilbo very carefully, which came four days after its original publication date,” Jang added.

“It was the time when a number of people were starving to death because of the arduous march going on at the time. What angered me the most was the fact that the richest king lived in the poorest country.”

Around that time, Jang started writing poems criticizing the system of North Korea in his notes. He also informed his friends of the reality of South Korea.

After being accused of distributing South Korean magazines in January 2004, he left North Korea. When crossing the border, he brought his notes with him. The notes he brought contained the famous poem called “Selling My Daughter for One Hundred Won.” The poem paints a vivid picture of the Dongdaewon District market in Pyongyang in 1999.

“Imagine the feeling of the mother who has to sell her daughter for 100 won ($0.09). That is the reality of North Korea. North Korean defectors cross the border, risking their lives.”

Some of Jang’s family members still reside in North Korea. When mentioning his mother, he hesitates. “Defectors also have barbed-wire fences in their hearts. Leaving the country does not completely remove the guilt from your heart. The only way to become a good son again is to destroy the North Korean government,” Jang said.

Jang will become a father at the end of this year. He wonders when his mother will be able to hug her grandson.

He said, “I will constantly publish poems announcing the horrendous reality of North Korea.”