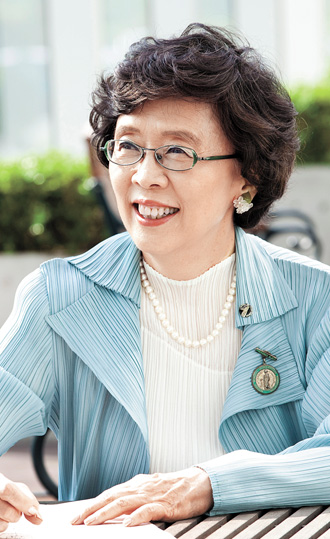 Powerhouse Korean professor Park Kyung-ah has been elected president of the Medical Women’s International Association, and will become the group’s first Korean leader since its founding in 1919.

Formerly president of the Korean Medical Women’s Association until last month, Park is also a professor at Yonsei University’s College of Medicine.

Medicine runs in Park’s family, as she is the daughter of 88-year-old Na Bok-young, the first female anatomist in Korea, who is well known as an honorary professor at Korea University. Park is an anatomist, too.

The doctor’s regular visits to her mother’s laboratory sparked an interest in biological science from a young age, and Park naturally followed in her mother’s footsteps as an adult.

She not only did so by selecting the same speciality as her mother, but also by becoming the 25th president of the Korean Medical Women’s Association. Na served as the organization’s third president, and the mother-daughter pair have their portraits displayed in the same place at the association’s office.

Park said her first connection to MWIA was, appropriately, through her mother.

“When I was in elementary school in the 1950s, Filipino pediatrician Fe del Mundo, who was the then-president of MWIA, visited Korea. I watched my mother, who was then president of the Korean Medical Women’s Association, meeting with her,” she said. “My mother also accompanied me during my first visit to the general assembly of MWIA held in Canada in 1984.”

MWIA is a nongovernmental organization first established in 1919 with the purpose of increasing female influence in the world of medicine, where women have often faced discrimination.

Besides providing networking opportunities among female doctors, the association goes abroad to provide medical services in developing countries including Nigeria. The group also campaigns for the prohibition of female genital mutilation in Sudan, conducts campaigns to provide vaccinations against cervical cancer and researches the effect gender can have on medicine’s efficacy. Approximately 90 countries are currently represented in the association.

As part of her work there, Park expressed her desire to “provide medical aid to North Korea and to invite North Korean female doctors to join the association.”

Recently, in recognition of all of her accomplishments, Park received the KMA Pfizer Special Prize for International Contributions to Medicine, jointly sponsored by the Korean Medical Association and Pfizer Korea, on April 29.
By Park Tae-kyun[enational@joongang.co.kr]