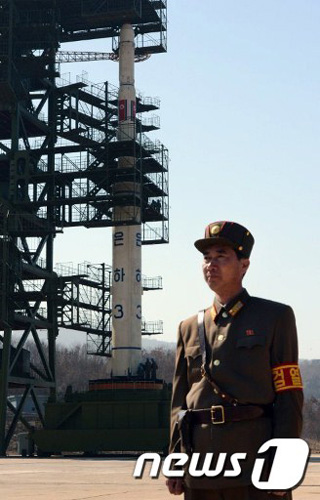 WASHINGTON - North Korea’s unusual acknowledgment of a failure in its recent rocket launch represents an apparent shift in the media environment there, with local people starting to gain more access to outside news, a U.S. government official said Thursday.

“In some ways, the way the North Korean media dealt with the missile failure was quite remarkable,” Amb. Robert King, special envoy for North Korean human rights issues at the State Department, said at a seminar.

“I think the point is that the media environment in North Korea has changed and is changing,” he added.

Hours after the North fired a long-range rocket in mid-April, its state-controlled media announced that the launch, closely monitored by the international community, was unsuccessful.

Such an announcement was unexpected, given that Pyongyang had claimed success for previous rocket launches that were believed to be failures. King pointed out that Pyongyang can’t just say, “Let’s play patriotic songs” to cover up embarrassing mishaps because alternative news and views are becoming more available for its people.

His assessment is backed by a detailed report by InterMedia, a Washington-based consulting group, about the level of information flow in the communist North where its 24 million people are under tough state control.

“A substantial portion of the North Korean population has access to outside media, notably through foreign TV, foreign radio and foreign DVDs,” read the 88-page report, titled “A Quiet Opening: North Koreans in a Changing Media Environment.”

InterMedia, commissioned by the State Department, said it interviewed several hundreds of North Korean defectors from 2010-2011, travelers and experts.

“Sharing of illegal foreign content is a key factor in strengthening horizontal bonds between North Korean citizens, breaking the state’s top-down monopoly on the supply of information and ideas,” it said.

A growing number of North Koreans are enjoying South Korean dramas, movies and songs, mainly through DVDs smuggled through China, it noted. Only 20 percent of North Koreans had viewed foreign DVDs in 2008, according to a sample survey of 250 people, but the percentage rose to 48 percent in 2010, the report said.

In a panel discussion on the report, Abraham Kim, vice president of the Korea Economic Institute, said the report was a fascinating look at how the outside world is penetrating North Korea’s closed society through entertainment, information technology and media.

He then quipped that he didn’t think the makers of popular South Korean dramas and songs knew they were “subversives.” Yonhap