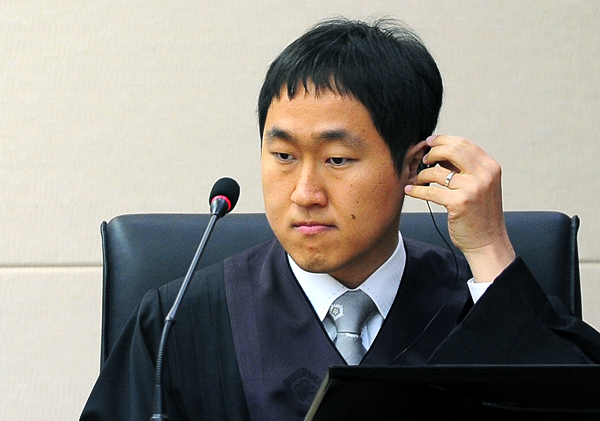 The nation’s first blind judge, Choi Young, adjusts an earpiece as he presides over his first public ruling for a civil case yesterday morning at the Seoul Northern District Court in Dobong District. [NEWSIS]


A junior judge in black robes enters a courtroom in northern Seoul with the support of a fellow judge and takes a seat at the bench.

Unlike the other two judges seated on the bench, he has a large laptop computer at his desk and fastens an earpiece to his left ear.

Because Choi cannot read the relevant documents, a sound recording has to be made of all written court documents which he listens to with the earpiece plugged into his laptop. In between listening to the recordings, he quietly discusses the case with the other two judges.

But how does he make a final ruling? Judge Lee Chang-yeol, a spokesman for the Seoul Northern District Court, said, “Judge Choi usually listens to the recordings twice and remembers all the content.”

Choi lost his vision to retinal degeneration which began in 1998 when he was a high school senior and worsened in the middle of his law studies at Seoul National University. His vision is limited to only being able to perceive if a room is lit or not. Still, he passed the bar exam in 2008 and completed two years of mandatory training at the Judicial Research and Training Institute.

Since he began his term at the Northern District Court on February 27, he has presided over some 36 civil lawsuits. Compared to other judges, he is assigned 40 percent the number of cases, which will slowly be increased as he adjusts to court life. There have not yet been any complaints about his rulings from civilians.

But because he cannot read the documents required to handle a case, he has to take extra preparatory measures. When he receives a case, an assistant has to read aloud the complaint and related evidential documents. For physical evidence, the assistant has to describe it accurately in detail to paint a picture in Choi’s mind.

Choi organizes the material by typing it out and employing a sound conversion program so that he can listen to his written words at any time. Likewise, he can write up a ruling through a program which reads out the text he types instantly.

“Before my appointment, I had much trepidation about working at the court but those doubts are slowly starting to subside,” he said yesterday after the trial closed. “But the weight and responsibilities of being a judge give me new worries.”

By No Jin-ho, Sarah Kim[sarahkim@joongang.co.kr]