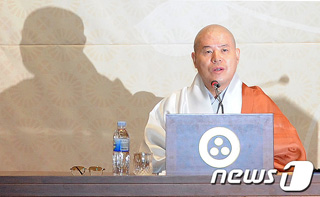 Reeling from the shocking revelation that eight of its monks engaged in gambling while intoxicated, the Jogye Order of Korean Buddhism, the largest Buddhism sect in the country, released a formal written apology yesterday.

Venerable Jaseung, the executive director of the Executive Office of the Jogye Order, apologized in a statement, “To all citizens and Buddhists we express repentance. We deeply show penitence for causing anxiety and worry to those who support Buddhism.

“Ascetics and mentors, who should be all the more restrained from material desires, instead recently committed acts that are too embarrassing to even speak of.”

Ahead of Buddha’s Birthday on May 28, the order expressed that it will hold forums to reform the Jogye monk community and stated that the gambling issue will be thoroughly investigated within the order.

The venerable further stated that as the head of the executive office, he also will “reflect on the complacency and mistakes” of the incident and take responsibility by entering a 100-day period of meditation for repentance from next Tuesday.

The Seoul Central District Prosecutors’ Office said on Wednesday that the eight Buddhist monks were accused by Venerable Seongho, a former official of the Executive Office of the Jogye Order, of gambling with hundreds of millions of won through a petition he submitted to the prosecution on Wednesday.

The monks played poker using 10,000 won ($8.70) and 50,000 won bills, drank luxurious whiskey and smoked cigarettes on April 23 for 13 hours until the next morning in a suite room in the Baegyang Hotel in Jangseong County in South Jeolla.

A USB with video footage of their activities was given to the prosecution. Prosecutors said that the eight were staying at the hotel to participate in the last day of ancestral worship rites for monk Susan, a former chief priest of Baekyang Temple who passed away in March.

The Jogye Order initially expressed that the gambling issue might be exaggerated for internal political reasons.

The Seoul Central District Prosecutors’ Office opened an investigation on the eight monks yesterday and will begin with questioning Venerable Seongho of the Geumdang Temple in North Jeolla, who first brought attention to the gambling monks. Based on his testimony, they will proceed to question the monks involved in gambling. They will also examine CCTV footage of the gambling scene.

The 13th spiritual head of the Jogye Order, Venerable Jinje, also expressed his apologies for the wayward behavior of the monks on Wednesday afternoon during a press conference held for the upcoming Buddha’s Birthday at Donghwasa, a Buddhist temple of the Jogye Order located in northeast Daegu. He criticized the monks for being “tempted by greed, money and glamour.”

But the spiritual leader also said, “There are many who shave their heads and enter monkhood but cannot escape from their previous habits,” and that the order’s executive office will handle the situation.

Six high-ranking officials, including the director of the administration and the director of finance of the Executive Office of the Jogye Order, resigned from their posts to take full responsibility Wednesday.