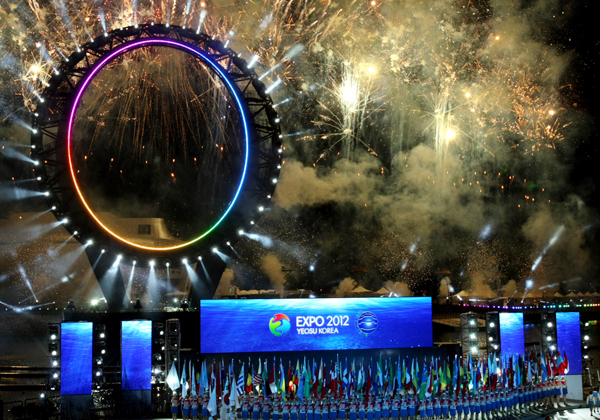 A flamboyant opening ceremony marks the kick off of the long-awaited International Exposition in Yeosu, South Jeolla, last night. President Lee Myung-bak and top leaders and their spouses of 13 foreign countries or international organizations were in attendance. [NEWSIS]


YEOSU, South Jeolla - The International Exposition Yeosu Korea 2012 kicked off with a glitzy opening ceremony last night with thousands of political and business leaders from home and abroad gathering in this otherwise serene, small port city.

President Lee Myung-bak and top leaders and their spouses of 13 foreign countries or international organizations - including Peruvian President Ollanta Humala and his wife Nadine, Denmark Crown Prince Frederik Andre Henrik Christian and his wife Crown Princess Mary Elizabeth Donaldson - attended the opening ceremony held at the Big-O stage on the waters off the Yeosu New Port.

“The long-awaited moment of the opening of Expo 2012 Yeosu Korea has arrived,” declared Vincent G. Loscertales, secretary general of the Bureau International des Expositions, during the opening ceremony that started at 6 p.m.

“After many years of preparation, challenges and efforts on the part of the organizers and participants, we have reached the momentous day of the beginning of three months of celebrations and discussions on the critical theme of the sustainability of our oceans and coasts,” Loscertales said.

Since winning the hosting rights in November 2007, Korea has prepared for the 93-day international event with the ambition of joining the ranks of other maritime powerhouses. The event’s official launch for the public is today.

Themed the “Living Ocean and Coast: Diversity of Resources and Sustainable Activities,” the Yeosu Expo is bidding to stage a first-ever ocean expo, and part of the events will be held on the coast or against its backdrop.

Kang Dong-suk, chairman of the organizing committee of the Yeosu Expo, hopes it will be the most dazzling in the 160 years of World Expo history.

“The organizing committee has made its utmost efforts to prepare exhibitions that will showcase the preciousness and endless possibilities of the ocean, the expo’s theme,” Kang said during a welcoming speech at the opening ceremony.

The Yeosu event, he said, will “provide an opportunity to address the challenges of climate change faced by the international community and propose the ocean as the vision for the sustainable development of humankind in the 21st century.”

The 170-minute-long opening ceremony was meant to be a faithful reflection of its theme, the organizers said. A 30-minute-long Ocean Concert that opened the celebratory event featured a medley of classical music pieces played by a 60-member wind orchestra in front of a parade of sailboats and sea vessels.

Other various cultural performances, new media shows and fountain shows were also part of the Big-O, one of the landmarks of the Yeosu Expo.

The Big-O, a 40-meter (131-foot) multimedia structure, provides a stage for the performances. There is seating for more than 30,000 people, the organizers said.

A total of 104 countries and 10 international organizations will attend the Yeosu Expo. A marching ceremony by flag bearers representing all of the participating countries was also held during the opening event.

“Guests will be able to get a sense in advance of the major cultural events to be performed throughout the expo,” said Lee Sung-bae, a manager of the organizing committee, before the start of the opening ceremony.

More than 80 pavilions and experience facilities will be open to the public throughout the Expo, which will hold approximately 400 performances more than 8,000 times.

Many participating countries and organizations will hold their national performances at the International Pavilion and at other venues.

Seven Korean conglomerates such as Samsung, Hyundai Motor, LG and Posco are also participating in the expo with their own pavilions in which they showcase their respective technologies and corporate philosophies.

Some other landmark structures at the expo include the Sky Tower, which stands at 57 meters high and will function as the world’s loudest pipe organ.