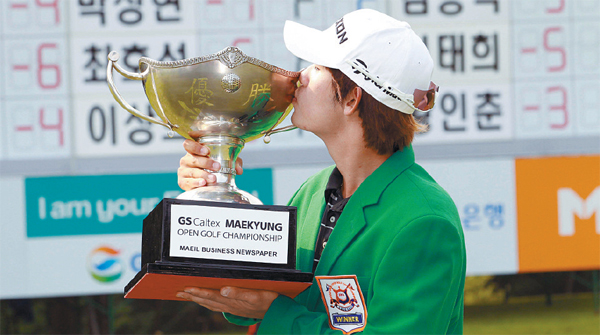 
Kim Bio claimed his second professional win in Korea, his first in 21 months, in the GS Caltex Maekyung Open yesterday.

At Namseoul Country Club in Seongnam, Gyeonggi, Kim shot 4-under 68 in the fourth round to finish the event at 15-under 273, edging Ryu Hyun-woo, who fired a daily-best 66 in the final round, by five strokes.

On the final day of the Maekyung Open, Kim, who was leader after the third round, made a nervous start, making a bogey from the par-4 first hole.

However, Kim made a birdie in the next hole and also managed to cut his scores from the seventh and the ninth hole. He cruised through the other nine holes as he collected birdies at the par-4 13th and par-5 16th to seal his victory. In the end, the Yonsei University student was also the only golfer to shoot under 70 throughout the tournament.

This was Kim’s first victory of the season and his second career win in both the Korea Professional Golf Association and One Asia Tour since this event was co-sanctioned by both organizations.

Kim won his first KPGA victory in August 2010 at the Johnnie Walker Open and collected his first victory in the One Asia Tour last year by winning the Nanshan China Masters.

Eight-time KPGA Tour winner Kang Kyung-nam took third place at 9-under 279, while Park Sang-hyun, who was in second place after the third round, struggled in the first nine holes with 4-over par and finally managed to finish at fourth place with 7-under 281.

Defending champion Kim Kyung-tae finished the event at 15th place with six other golfers at 2-under 286. The 26-year-old, who was the KPGA’s top money earner last year, shot 2-over par yesterday. He was up-and-down throughout the final round. While collecting four birdies, he made a triple-bogey on the par-4 7th hole and then made bogeys on the last three holes. All top-10 finishers were Koreans, with Australian Jamie Arnold tied for 12th to finish best among foreign players.

Kim’s victory yesterday will likely boost his confidence to play in the U.S. PGA Tour. Kim first earned his tour card after finishing fourth at the PGA Qualifying Tournament, better known as Q-School, in December 2010. He was the youngest golfer in that season to earn a place in the tour.

However, Kim struggled in his PGA debut and lost his Tour card after failing to finish inside the top 125 in the prize money rankings. He finished 162th last year.

Still in early 20s, Kim has been a promising player from the start. He claimed the amateur championships in both Korea and Japan in 2008 while he was attending Shinsung High School in Anyang, Gyeonggi.

He turned professional in 2009 and first played in Japan, but struggled and returned to Korea in 2010.