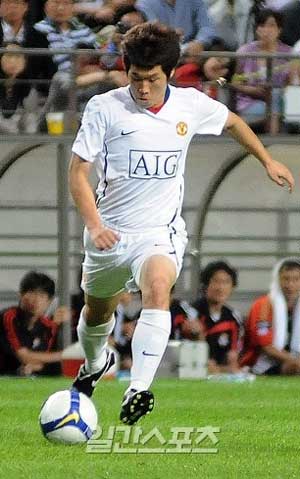 It will be the first time since 2003 that Park, who has never played in the K-League, will see a K-League match from the stadium. Park made his professional debut in Japan after signing with Kyoto Purple Sanga in 2000 while he was with Myongji University and then left for Netherlands’ PSV Eindhoven in 2003 before landing in the English Premier League.

The 31-year-old said last year the Bluewings were his favorite Korean team and that he would visit them to offer support during his offseason.

Park said that he will invite students and teachers from Seryu Elementary School, Anyong Middle School and Suwon Technical High School, all of which he attended, to see the game with him. He also plans to donate soccer shoes and a signed ball to fans there.

Park is scheduled to return to Korea on Friday as United ended its season with Sunderland yesterday. The former Korea national team captain said through the Bluewings that he is hyped up to meet K-League fans.

“I’m excited that I’m going to meet fans from my hometown Suwon where I dreamt of becoming a national team member from childhood,” Park said.

K-League officials are hoping that Park’s visit to the stadium will give the football league a publicity boost.

Recently, Ahn Jung-hwan, the 2002 World Cup star who is currently working as an honorary public relations ambassador for the K-League, asked for Park’s support.

“I think Ji-sung will help us once he retires,” Ahn said on Saturday after attending a K-League match between Sangju Sangmu Phoenix and Chunnam Dragons in Sangju, North Gyeongsang. “Like me, Ji-sung received a lot of support from fans, so I think he should also help the K-League.”

After viewing the K-League match on Sunday, Park is scheduled to leave Korea on May 21 for a charity match in Thailand on May 23.

The match is hosted by the JS Foundation, which Park established last year, and will be held at SCG Mungthong Stadium near Bangkok.

In its second year, the event, under the name Asian Dream Cup, will feature a match between Park Ji-sung, who will play with other footballers, and the All-Star team from the Thai football league. Ahn will be assistant coach for Park’s team, and football stars from around the world are reportedly ready to participate.

Fabio Cannavaro, a former Italian defender who won the FIFA World Player of the Year award in 2006, and AC Milan’s international midfielder Sulley Muntari have both accepted invitations.

The money raised from the event will be donated to help child victims of Thailand’s heavy flooding last year, according to the JS Foundation.