GS Caltex’s industrial complex down in Yeosu, South Jeolla Provided by the company


YEOSU, South Jeolla - Under the scorching summer heat last Thursday, oil was being transferred to a 15-meter (50-foot) tower at a GS Caltex processing plant that had all the marks of a highly precise operation. Though it was a weekday, only a handful of employees were in sight at the site of the nation’s second-largest oil refiner, as major investments in recent years have automated much of the work.

The business is an unlikely one for Korea, which has no oil of its own, but is driven by the incredible opportunity for profit in the refinery business. Though GS Caltex imports all of its oil, it earned $20 billion in exports last year - the most export revenue earned by any Korean company except Samsung Electronics. 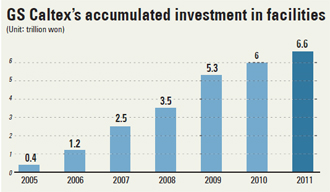 Refining is not easy work and is done under high security. Hydrogen and other chemical catalysts must be added to imported oil to create higher quality products.

In recent years, the company has been investing heavily in upgrading its automated systems to develop higher quality refined products, such as diesel and kerosene, which are in demand overseas. 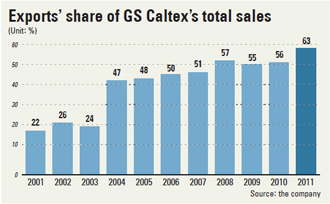 China is the biggest importer of GS Caltex among 18 countries, including the U.S., Japan, the U.K., Singapore and Brazil, as it purchases 30 percent of total exports. The processing plant in Yeosu is the core of the company’s business as it produces fuel that accounts for 81 percent of annual sales.

Exports themselves account for 63 percent of GS Caltex’s total sales. And executives are happy to brag about this fact.

“It is worth celebrating that an oil refiner in a country that does not have a drop of oil gets most of its returns from overseas,” said Kim Seong-min, vice president of GS Caltex’s operations planning division based in Yeosu. “We think that it’s the right way for an energy company to create revenue.”

To maximize export revenue, GS Caltex has been shifting from producing low-quality Bunker C to more refined fuels, and from 2008, the company has increased the money it earns from exports by $5 billion from $15 billion. Part of this increase is because there’s more to be earned from higher-quality fuel.

And locally, demand has decreased for less-refined fuels.

Bunker C was once widely used due to its low price tag, but increased awareness about its negative environmental impact means it is no longer the fuel of choice. Now mostly used to fuel ships, Bunker C has a high sulfur content that pollutes the air when burned.

Kim said that focusing on more refined products is “one of the ways for us to create greater revenue and also think about the environmental impact.”

To increase the production of such high-quality fuels, GS Caltex said that it will complete a fourth heavy-fuel refinery next year.

After the facility is up and running, the company will have the largest refining capacity in Korea, with the facilities to process 268,000 barrels of refined fuel per day.

“Investing in upgrading facilities that turn Bunker C into higher quality products is part of the company’s contribution to the expansion of green growth,” said Hur Dong-soo, GS Caltex’s chairman. “Although the cost that goes into the establishment of such facilities is high, we should see it as investing in a business that has a huge potential.”

The company, which set up its first refinery in 1995, has invested more than 5.6 trillion won ($4.9 billion) since 2005 to build the new plant and upgrade its current facilities.

The extreme profitability of the refining business has drawn the attention of the Board of Audit and Inspection recently, which asked the federal government to eliminate the 10 percent corporate tax break given to oil refiners when they upgrade their facilities. Though originally meant to encourage such upgrades, some officials now believe that reducing the companies’ tax burden is imprudent given their large profits.

But GS Caltex said that while it is aware of the board’s recommendation, the change in tax policy is not terribly worrisome.

“Whether we get the tax break or not has very little influence on our operations. So of course we will continue to focus on heavy-oil processing regardless,” said Lee Sang-hoon, managing director of GS Caltex’s communications team.