Impact of airbags the focus of new Camry ad

Impact of airbags the focus of new Camry ad 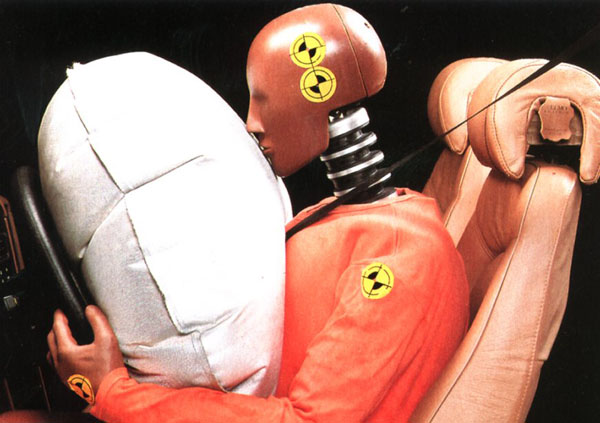 Airbag deployment is tested on a dummy.[JoongAng Ilbo]


While high car safety ratings are often underscored by automakers, the quality of airbags is seldom pinpointed as a distinguishing characteristic in the market; advertisements focusing on impact safety highlight the number and placement of airbags rather than the make. 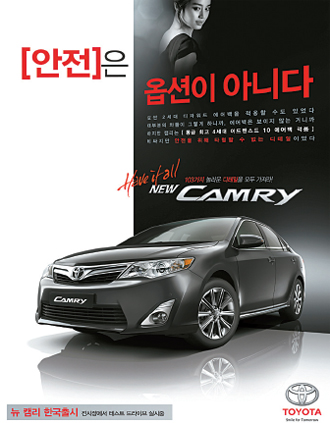 Toyota Korea’s ad says that safety is not an option and that the Camry midsize sedan is equipped with advanced airbags. Provided by the company

But Toyota Korea’s marketing campaign for the seventh generation Camry midsize sedan has sparked controversy in the domestic market with its claim of using “advanced” airbags.

“We could have used cheaper, depowered airbags and most other cars use them because airbags are not readily visible,” the ads say. “The Camry is equipped with 10 of the fourth-generation advanced airbags.”

Although the Camry ad did not specifically mention other automakers, it clearly compared the Camry with volume models from leading domestic automakers like Hyundai and Kia. Unlike the Camry, which is made in Toyota’s Kentucky plant in the United States, most domestic cars sold in Korea have depowered airbags.

Front airbags have evolved rapidly since 1997 when they became a federally required safety feature in the United States. Both depowered and advanced airbags are the result of changes in U.S. vehicle safety standards and regulations. 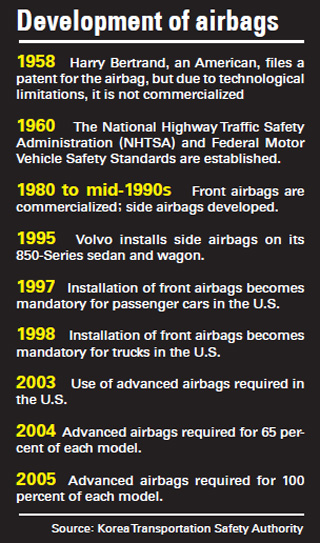 The dangers of first-generation airbags became known due to the deaths of a number of children and small adults, particularly those not wearing seatbelts, because of the extreme force with which the airbags deployed. In 1997, 53 people were killed when airbags deployed in collisions, 31 of whom were children, according to the National Highway Traffic Safety Administration. Later, the U.S. federal regulators changed the regulations to require depowered airbags with air pressure decreased by 30 percent.

As airbag technologies developed further, automakers began to develop airbags that reduced deployment force according to the size of an occupant. In the early 2000s, some automakers came up with advanced “multistage” or “dualstage” airbags. In 2003, the U.S. regulations changed again and required the use of advanced airbags for all cars weighing 4.5 tons or less and sold in the United States, beginning with 20 percent of each model.

The airbag-related rules are tougher in the United States because under federal law, wearing seatbelts is not required, though all states enforce seatbelts in some form. It is also the only country that mandates the use of advanced airbags. Korean automakers installed dual-stage airbags, which adjust the speed of deployment based on the velocity of the collision, for their cars sold in the United States. For most vehicles sold in Korea, however, they use cheaper, depowered airbags. Exceptions include the Genesis and Equus from Hyundai Motor; the Alpheon from GM Korea; the SM5 and SM7 from Renault Samsung Motors; and the Chairman W from Ssangyong Motor.

“Though the two types of airbags are not much different than each other in protecting passengers, we’re using dual-stage airbags for luxury cars because people think they are better,” a Hyundai spokesman said.

Yet Hyundai has advertised that the dual-stage airbags equipped in the Genesis and Equus sedans are superior to depowered airbags.

A spokesman at a local airbag producer had this to say: “Depowered airbags are as safe as dual-stage airbags as long as seatbelts are fastened.”

“Even the U.S. authority is not certain whether advanced airbags are better or more cost-effective than depowered airbags,” said Lee Jae-wan, a senior researcher at the Korea Transportation Safety Authority. Lee said the U.S. government requires advanced airbags because wearing seatbelts is not mandatory.

“As long as passengers are wearing seatbelts, there is little difference between depowered airbags and advanced airbags in terms of safety,” Lee said.

“Even though Toyota Korea advertises that the Camry is equipped with advanced airbags, depowered airbags are widely used in Japan,” he added.