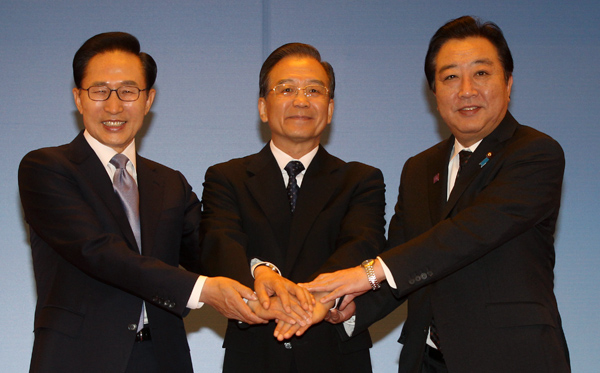 
BEIJING - Leaders of Korea, China and Japan agreed yesterday to begin negotiations for a trilateral free trade agreement before the end of this year, taking a step forward to create one of the world’s largest markets in the region.

After the meeting, Lee and his counterparts adopted the Joint Declaration on the Enhancement of Trilateral Comprehensive Cooperative Partnership and other agreements and jointly addressed the media.

At a media conference, Wen said the three leaders agreed to begin the trilateral free trade negotiation before the end of this year. Lee and Noda also expressed high hopes to lift trade barriers among the three countries to create a Northeast Asian market with a population of 1.5 billion and $1.2 trillion combined GDP.

The three countries have conducted a survey from 2003 to 2011 on the prospect of the FTA.

Korea and China have already declared the launch of negotiations for a separate bilateral FTA. In his interview with the CCTV 2, which aired Saturday in China, Lee expressed his hope to conclude the pact in about two years - as long as the two sides can reach a compromise on some sensitive items such as agricultural and fisheries products.

At the joint press conference, the three leaders also stressed the importance of the agreement among the three governments for the promotion, facilitation and protection of investment. The accord still needs to be ratified in the Korean and Japanese legislatures, while China has already approved it.

The investment agreement is the first economic accord reached among the three countries. The Blue House expressed high hopes that it will protect the Korean companies and investors in the two countries. Lee stressed that the agreement will work as legal grounds to protect investments made among each other, particularly Korean investors in China.

According to the Blue House, the agreement will guarantee that the three countries will treat each other the same way they would treat their own citizens or their most-favored nations. The agreement guarantees fair, fast and reasonable compensation for the possible losses expected from any nationalization or expropriation processes.

North Korea was also an important issue discussed at the summit. The communist regime headed by its new, young leader Kim Jong-un fired a long-range missile in April and speculations were also high that it was preparing for a third nuclear weapons test. The three leaders agreed yesterday that the UN Security Council issued a timely and proper resolution to respond to the North’s latest missile launch. Lee, then, took a step further and pressured Beijing to use its influence over Pyongyang to stop the regime’s provocations.

“I evaluate China’s request to North Korea to pay special attention to the livelihoods of its people,” Lee said, standing next to Wen. “I proposed that the time has come for us to find a new, more effective measure to restrain the North’s provocations.” Lee, however, did not say how China reacted to it.

While the three leaders agreed that their security priority is lowering the tensions on the Korean Peninsula, Wen showed a slightly different view toward the matter. “We should move beyond the Cold War way of thinking and resolve the issues with dialogue and negotiations,” Wen said.