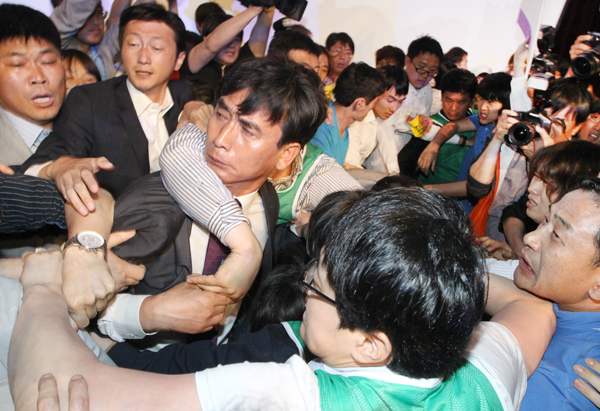 
A violent brawl erupted during a conference of the opposition Unified Progressive Party on Saturday. Members of the largest faction clashed with the leadership over the primary-rigging scandal.

Party members were supposed to discuss whether to force the proportional candidates elected in the March primary to step down.

Before the meeting, all of the party’s four co-chairs - including Cho Joon-ho, who is leader of the internal investigation team into the March primary rigging - announced their resignations, taking responsibility for the primary-rigging allegations.

“We ask you to rebuild the UPP for the people, based on trust and reconciliation,” co-chairwoman Lee Jung-hee told party members on Saturday. “Now I resign as co-chair.”

Except Lee, the other three co-chairs said they will finish the Central Steering Committee meeting and then step down.

At the party conference, they were supposed to discuss the party’s new platform and two key issues - whether the party’s 14 proportional candidates should step down, taking responsibility for the primary-rigging scandal, and founding emergency leadership, appointing Representative Kang Ki-kab as interim leader.

However, starting at 2 p.m., the meeting was frequently interrupted by the largest faction’s members who claimed they couldn’t trust the internal probe into the case and demanded a reinvestigation. Non-faction members are demanding that all elected proportional candidates step down.

The largest faction also said that some members of the Central Steering Committee were replaced by about 50 non-faction members. They suspected that the three remaining co-chairs, who are outside the faction, are trying to control the meeting by using their people.

At around 9:40 p.m., Co-Chair Sim Sang-jeong pushed forward the first bill on a revised party platform, saying “Unless you don’t have any objections, I declare we pass this bill unanimously.”

She made the decision by asking party members “Do you agree on this bill?” and no one made an objection.

Suddenly, a bunch of party members jumped onto the podium. Security tried to block them and violently fought with them.

Roughly 100 party members rushed the podium, and others in the audience threw water bottles, papers and paper cups at the three co-chairs.

Some members yelled “Stop it!” and others shouted “Stop the illegal Central Steering Committee!”

Cho, a co-chair who publicly said the primary was apparently rigged and invalid, received the brunt of the attack because he wasn’t instantly protected by security guards. Some members grabbed his hair and tore his clothes. Co-Chairman Rhyu Si-min, who is a non-mainstream faction leader, was also brutally beaten, grabbed by his throat and his glasses were torn from his face.

The three co-chairs managed to escape the hall and met again later to discuss further measures. Sim reappeared at around 11:30 p.m. in the hall and announced that the meeting would be adjourned. Non-faction members discussed whether to reconvene the meeting immediately or to pass bills through online voting.

Lee yesterday said that she will take “silent punishment” for Saturday’s brawl. “I’ll bare all the punishment for my incompetence for causing this situation,” Lee said using her Twitter account.

Disappointed by the liberal party’s chaotic meeting, the Korean Confederation of Trade Unions, the country’s largest left-wing coalition of labor unions, said it will consider whether to withdraw its support for the party at a meeting slated for Thursday.

If it does so, about 45,000 members of the confederation who joined the UPP will defect from the party, a huge loss for the minor liberal party.

The confederation had an eight-hour-long meeting on Friday night and issued a statement Saturday morning demanding the resignation of all proportional candidates and the leadership.

“We demand all measures be implemented, including the resignation of the leadership and all proportional candidates and election managers,” the statement read. “And forming an emergency committee should be a starting point for intensive reform.”

“If the UPP abandons our last request, we will reconsider our relationship with the party fundamentally, including potentially withdrawing our support for the liberal party,” the statement warned.