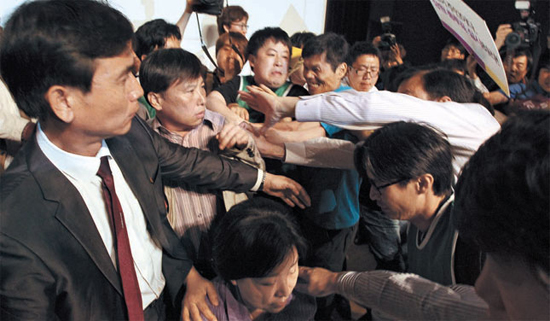 The opposition Unified Progressive Party’s largest faction members attacked three co-leaders of the party, turning the Central Steering Committee meeting into a mess. Immediately after three co-chairmen of the party hammered to pass a revised party platform, a bunch of members jumped onto the podium in the meeting hall and shouted “Kick out the illegal central committee!”.

Cho Joon-ho, one of the UPP’s four Co-chairs and the leader of the party’s internal probe investigation team into the March primary rigging scandal, was brutally beaten by the largest faction members who don’t agree on Cho’s claim that the election was rigged. When Cho tried to leave the meeting hall, some members grabbed his hair and blocked his way. Another Co-chair, Rhyu Si-min, also brawled with party members when he was trying to protect Co-chairwoman Sim Sang-jeong.

The meeting was held in Ilsan Kintex, Gyeonggi, starting from 2 p.m., but has been adjourned at 11 p.m., in the midst of chaotic and violent protests.