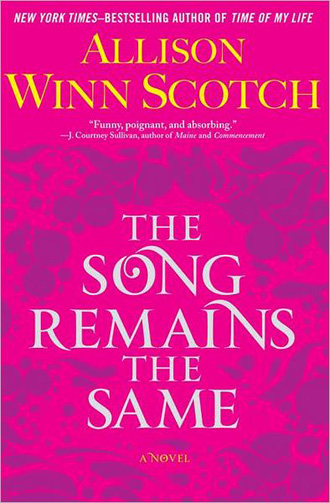 “The Song Remains the Same”

TOKYO - A fear of flying inspired bestselling author Allison Winn Scotch’s latest book, centering on a woman who awakes in a hospital with total amnesia, one of two people left alive after a massive plane crash.

“The Song Remains the Same” follows Nell Slattery as she tries to piece together her former life even as her nearest and dearest - her husband, mother and sister - all feed her information about who she was in line with their own personal agendas and issues.

Scotch spoke with Reuters about her book, identity and who we are without our memories.

Q. What was the seed for this book?

A. I’m not a good flyer, to be honest with you. I travel a lot, but I think once I had kids I sort of developed a - I don’t want to say paralyzing fear, because I still fly - but I’m a really nervous flyer. I have plane crash dreams when I’m stressed out, really acute plane crash dreams, and I’ve had them for a decade.

It gets in your psyche. It was my way of coping with my own anxiety about the worst happening to you. So I really started with that seed of, what if you’re in a plane crash, and obviously you have to survive that or there’s no book. What happens if you’re in a plane crash and how do you then live your life, when you’ve lived through the unliveable?

What took you to the next step, the idea of losing memory and everything?

I enjoy writing about women or men, any characters, who have a chance to reinvent themselves. I guess I was just struck with the concept of what happens when just everything is taken away from you, and yet you’re put back in the safe life.

Do you make the same choices, do you find the same satisfaction in what you found before? I’m in my 30s, and a lot of my peers are right in the trenches of child rearing, and some of my friends aren’t married and some of my friends aren’t happily married. You question should I work, should I not work? I think if a lot of us were presented with a clean slate, who is to say we would make those same choices? So that’s really how I came up with the concept, obviously taking it to a higher level since you’re writing a book. You can’t have a character just sitting around navel-gazing, wondering if she made the right choices. The amnesia allowed for that.

What ideas and thoughts about memory came up for you while you were plotting and writing?

I realized, and I think it’s not something you think about from day to day, but so much of who we are in our present is really based on the decisions that we have made in our past.

You think about all the people you dated and hopefully about the knowledge you accrued that maybe led to marrying your spouse and choosing your partner. Or the jobs that you’ve had that you enjoyed, or maybe pigeonholed you into a job you didn’t enjoy.

Or your friendships. Certainly I think a lot of us have friends with whom the relationship is based on a collective history, and if you’re put in a room with them now, who knows how much you would have in common?