Enlightenment is here already, if you know what you’re looking for

Enlightenment is here already, if you know what you’re looking for 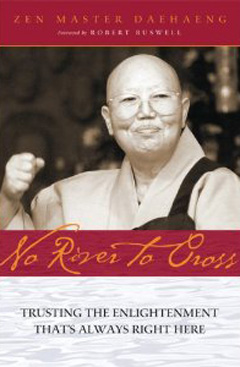 In a rare book which enables us to comprehend the basic concepts of Buddhism and even practice them in our daily lives, Zen master Daehaeng presents readers with astonishingly simple yet profoundly insightful answers to a series of fundamental questions like “Who am I and where do I come from?” Comprised of three parts - Principles, Cultivating Mind, and Applying the Principle to Mind - “No Rivers to Cross” teaches readers basic ways to practice what they learn.

The first step toward cultivating your mind begins with letting go of not only distressing thoughts but also most inflexible ideas. “The worst prison in the world is the prison of thought,” Daehaeng explains.

And letting go isn’t as simple as saying, “I don’t care.” “When you let go, you let go single-mindedly, knowing that your foundation, or your true self, is the only thing that can truly take care of everything,” the master says.

If enlightenment means “crossing over to the other shore,” the far-off place where we can at last be free from suffering, Buddhist teachings are rendered as the raft that takes us there. But Zen master Daehaeng beckons us, through her personal and illustrating examples, to the awakening that enlightenment is always, and already, right here, as long as you are in touch with true self.

One may wonder how to practice if Buddhists must bow 108 times every day. But, fear not, because Buddhism is more accessible than you might think, according to the book. Zen meditation itself can surpass 10,000 bows as “mind is beyond time and space, does not have form, and is completely free.”

The Zen master’s attachment to Buddhism started early in life. Born in 1927 to an aristocratic family in Seoul, she was forced to live a deprived life in a desolate dugout in southern Seoul with her family during the cruel Japanese occupation. This experience pushed her to find her true self, and she was ordained as a Samini - the first level of ordination for a female monk - in the spring of 1950.

Since the hippie days in America, Zen Buddhism in particular, has become popular in the Western hemisphere as an alternative faith amid predominance of Christianity. Led by the Great Zen master Seung Sahn of the Jogye Order, hundreds of so-called Korean Zen centers have cropped up all across the world, beginning with the Kwan Um School of Zen founded in 1983 in Providence, Rhode Island. Three months before entering nirvana in 2004, the master told me, “There is no better place for practicing Zen than in Korea, as Zen has vanished in China and Buddhist monks don’t teach Zen properly in Japan.”

Originally published in 2007 by Wisdom Publications in the United States, “No River to Cross” was translated into four foreign languages -?German, Spanish, Chinese and Russian. With less than a fortnight left before Buddha’s birthday, this is a good book for those who want to find an easy answer to a myriad of complexities.