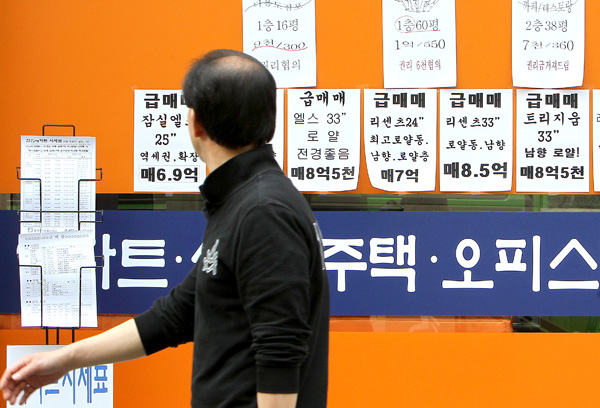 A man passes by a real estate agency in Jamsil-dong, southern Seoul, last Thursday when the government announced its latest measures to boost the flagging property market. Photo by Kim Do-hoon


It was the first Saturday since the government announced a new set of measures to revive the real estate market last Thursday, but hardly any customers walked into real estate agencies around the Jamsil Jugong 5 apartment complex in Songpa District, southern Seoul.

“[The measures] have been a tremendous disappointment,” an employee at one agency said. “It’s been even quieter since the measures came out.”

The Ministry of Land, Transport and Maritime Affairs announced on May 10 plans to ease lending limits and tax burdens in nearby housing sales.

But the government’s attempt to revive the slumping real estate market, especially in southern Seoul, appears to have fallen flat, as real estate agents report falling asking prices and a lack of transactions in Gangnam, Songpa and Seocho districts, southern Seoul.

According to property market researcher Real Estate 114, apartment prices in the Seoul metropolitan area in the week of May 5 and 11 dropped 0.01 percent from the previous week, despite the announcement on Thursday.

“When expectations rose for the measures at the end of last month, asking prices jumped 50 million won [$43,500] - but immediately fell by 20 to 30 million won after the announcement,” employee at real estate agency said.

“Even then, transactions have dried up. We’ve had just one sale so far this month, compared to more than 10 in April.”

“Not only was the main content of the real estate measures already known, but policies that could have actual effects on the market, such as a substantial easing of the debt-to-income ratio [DTI] or a cut in acquisition taxes, weren’t included,” said Kim Eun-sun, a researcher at Real Estate 114.

The current DTI limit of 50 percent applied to Seoul prohibits people from borrowing above 50 percent of their incomes in mortgages. Thursday’s measures merely raised the DTI limit in the expensive Gangnam, Songpa and Seocho districts from 40 to 50 percent, and left the limit in other regions untouched.

Unlike the last of the six set of measures announced by the government last year, which revived real estate transactions in the short-term by slashing acquisition and registration taxes, analysts pointed out that the effect of the latest measures wasn’t likely to be felt anytime soon.

“Many of the measures ease the burden of owning houses rather than selling houses and will not result in immediate market response,” said Hahm Young-jin of Real Estate Serve, another online property data researcher.