At lantern festival, enlightenment for all

At lantern festival, enlightenment for all 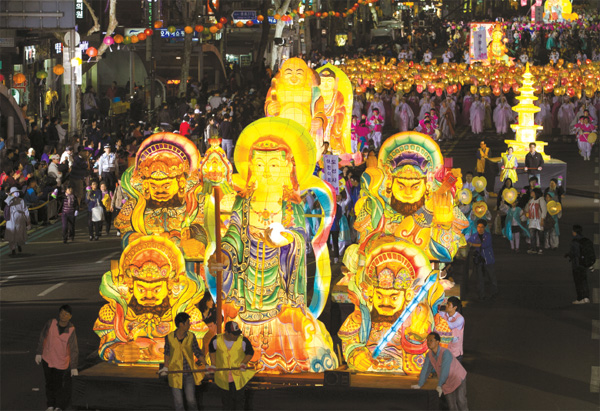 The lantern parade is one of the highlights of the Lotus Lantern Festival. This year, it will be held between 7 and 9:30 pm on Saturday, running from Dongdaemun, central Seoul, to Jogye Temple in Jongno District, central Seoul. Provided by the organizers


For centuries, Yeondeunghoe, the country’s Lotus Lantern Festival, has been a trademark celebration of Buddhists. Beautifully crafted and colorfully lit lanterns of all shapes and sizes celebrate hope for a world that is brighter and free of the dark troubles that have accumulated over the past year.

Combined, lanterns exemplify the bright light that Buddha’s deeds shine on a world of suffering, while lotus flowers symbolize Buddha’s purity. Lotuses are a common motif in many Buddhist paintings, decorations and sculptures designed to inspire followers.

But despite their age, the traditions of the yearly event have shown remarkable adaptability across the vicissitudes of history.

Since 2007, Buddhists have argued that this important religious event should get more recognition and support from the national government, even accusing President Lee Myung-bak, a devout Presbyterian, of bias in neglecting to officially acknowledge the significance of the Lotus Lantern Festival.

In keeping with the pragmatic development of the event itself, Buddhist leaders point not only to the festival’s spiritual value, but also to its growing popularity among non-Buddhists and its growing inclusiveness of people of other faiths in its festivities.

Officials at the Cultural Heritage Administration seem to have finally come around during the buildup to this year’s event, which begins on Friday and continues for three days at various locations around Seoul. They recognized the festival and its centuries of development as Intangible Cultural Heritage No. 122 in March, in large part because of arguments that it’s no longer an exclusively religious event.


Not just for Buddhists

The lighting of lotus lanterns began early in Korean history, with the first mentions dating back to the Silla era (57 BC-935). The exact timing of Yeondeunghoe evolved through the years. It initially started as a ritual held on the day of Daeboreum, the first full moon of the lunar calendar, but was later celebrated near Buddha’s birthday.

“Yeondeunghoe has been celebrated throughout the 1700-year history of Korean Buddhism and has had a great influence on people’s lives,” Jinmyeong, head of the culture division at Jogye Order, the country’s largest Buddhist group, told Korea media recently.

He explained that the festival is meant to bring illumination that frees people from their dark misconceptions about both religious and secular life.

In its early years, Yeondeunghoe was a purely royal celebration in which the outdoor lanterns of the royal palaces were lit and posh families enjoyed wine and food along with music and other performances while they prayed for the peace and prosperity of the nation. But as time went by, the festival evolved into a folk event to be enjoyed by the masses.

When it comes to Korea’s cultural heritage, there should be no boundaries between Catholics, Protestants or Buddhists, argue officials at the Jogye Order. To reinforce their point, they point to the secularization of other, similar festivals like Brazil’s Rio Carnival.

Its decision was not an easy one and came only after serious deliberation by experts and government officials. The CHA had previously delayed the designation in June last year, saying that the festival only operated intermittently and that it perpetuated vestiges of the Japanese colonial period. It also decided late last year to cut its budget for the popular Templestay program.

But in the end, help came from an unexpected source: the Korean Wave, or Hallyu, often associated purely with K-pop megastars like Girls’ Generation or Big Bang. The minister of culture, sports and tourism, Choe Kwang-shik, has a broader view of the phenomenon.

In June, he outlined his support of a so-called “third chapter” of Hallyu, which extends to traditional Korean culture. It aims to increase international awareness of Korea by riding on the coattails of popular performers and television shows that have already found their commercial niches abroad. The first chapter revolved around dramas, while the second one around pop music.

Thus Choe and other officials decided that in third wave, traditional content like the Lotus Lantern Festival should receive recognition from the government, too - giving Buddhists something to celebrate.

A wide array of events

And they have already begun, with a lantern lighting ceremony held at Seoul Plaza in Jung District, central Seoul, on May 7 as part of nationwide festivities for Buddha’s birthday.

Some 1,000 events are planned across the country over three weeks under the banner “Peace to Mind, Happiness to our World,” according to officials at Jogye Temple.

But the highlight of the festivities will most certainly be Yeondeunghoe, which itself consists of a wide range of events. Among the most important will be the exhibitions of lotus lanterns at two venues for 10 days starting from May 18 at Bongeun Temple in Samseong-dong, southern Seoul, and Jogye Temple in Jongno District, central Seoul.

The two programs that have garnered the most attention from foreign participants are the parade and classes that teach lantern making, she added.

The parade will be held between 7 p.m. and 9:30 p.m. on May 19, a Saturday evening, starting in Dongdaemun, central Seoul, and ending at Jogye Temple. The thousands of participants holding lanterns and marching together will evoke an ocean of light.