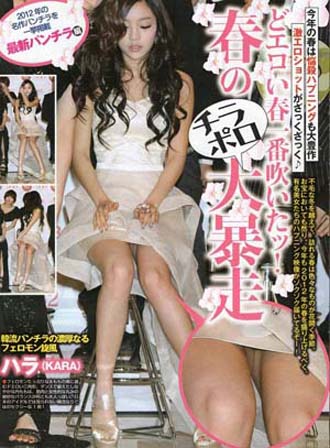 Kara member Goo Hara has become a target of some close-up scrutiny in Japan.
A picture of an article published in an adult’s entertainment magazine surfaced online on May 14, in which Goo’s short skirt when sitting down has been zoomed-in on.

The article entitled “Sexy Shots of Hallyu Stars — The side of an idol group that you will never see in a Japanese idol” also included similar shots of members from Girls’ Generation and Rainbow to make its point.

DSP Media has also announced that it will take legal actions against the publication for soiling Goo’s image.
Meanwhile, Korean netizens are furious over the article and at the publication and have defended Goo by saying, “That’s so low to criticize the celebrities of your neighboring country,” while some have expressed shame but added, “That’s the price you have to pay when you are active in Japan.”