Late-night pub fare celebrates ‘As One’

Late-night pub fare celebrates ‘As One’ 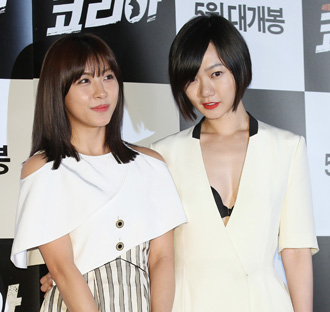 To mark their film “As One” exceeding one million views, actresses Bae Doo-na and Ha Ji-won will don aprons as waitresses to treat lucky fans to a night of feasting at a pub in Sinsa-dong, southern Seoul.

The event is set to take place tonight, and participants were selected from applicants who registered through the movie’s official Web site and Me2Day site.

According to Korean Film Council, the film, which opened on May 3, was viewed by some 1.2 million viewers in just 10 days since its release.

Other cast members and director Moon Hyun-sung will also attend the event.

The proceeds from the night’s sale of food and beverages will benefit charities that help marginalized youth and defectors from North Korea.

The film is based on a true story about a friendship that emerged between table tennis players from the North and the South back in 1991 when the two Koreas joined forces to compete as one nation at the World Table Tennis Championships, subsequently winning a gold medal in the process.