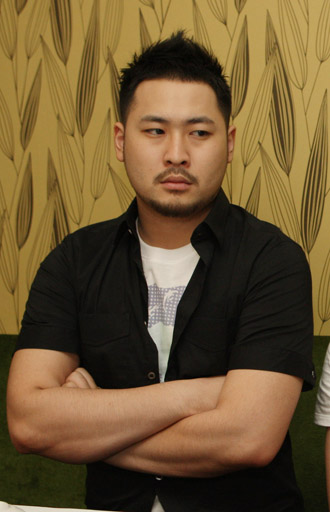 Singer Mithra Jin of hip-hop group Epik High was released from the Army yesterday. The singer, whose real name is Choi Jin, was welcomed back into society by a throng of fans, press and fellow band members during a discharge ceremony at the National Defense Committee in Yongsan District, central Seoul.

When asked what he did as a soldier stationed at the Army’s public relations division, the entertainer said that he had a lot of fun working with people whom he also saw on television.

The press asked which girl group he liked best, but the 29-year-old entertainer said he couldn’t keep up on the trends while serving.

“I did, however, make time to watch ‘Dynamic Duo’ on TV,” the singer said of his band’s rival on the Korean hip-hop scene.

“Congratulations, Mithra! You have proved yourself as a first-grade soldier,” he said.