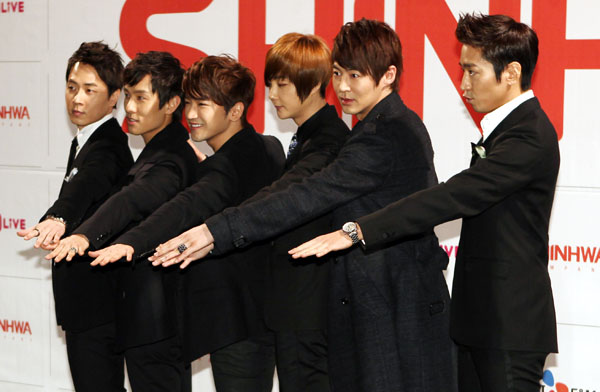 
Shinhwa, the ‘90s boy band currently performing in Asia, was in for a surprise when it received a most unconventional gift during its Taiwanese leg of the tour.

On Saturday, at the concert venue in Taipei, the band was greeted by swarms of local press, mobs of fans and 3.4 tons of pet food.

The band was there to perform for more than 8,000 fans as part of its “The Return” comeback tour. The unusual donations were a gift from seven of its fan clubs based in Taiwan.

The fan clubs were aware of how much the band loved animals and decided to make the donation to various animal shelters in the nation under Shinhwa’s name.

“This is the first time that all six members of the band took part in performing for Taiwanese fans. They were so touched by the fans’ presents,” said a representative from Shinhwa Company.

The Korean band will travel to Japan to continue on with its reunion tour.
From May 29 to 30, it will perform in Tokyo before making its way to Kobe on June 2.