Controversy is brewing in the non-life insurance industry as record profits are to fall into the laps of shareholders in the form of hefty dividend returns, with policy holders excluded from the benefits.

And while property insurers are reaping in returns, they insist prices should be raised due to the persistent growth of loss ratios over the years.

Major non-life insurance firms have announced their performance results for the 2011 fiscal year that started in April and ended in March 2012. Most reported net profits doubling on-year.

However, non-life insurers claim that these profits were not the result of exceptional growth in insurance sales.

“Last year that loss was limited to 300 billion won.”

Regulations on the financial burden in repairing insured cars that were in accidents have changed, and insurance companies are now responsible for paying less and improving loss ratios.

Previously, when an insured car got into an accident, the policy holder only had to pay a certain fixed amount - usually around 50,000 won - while the rest was covered by the insurance company. 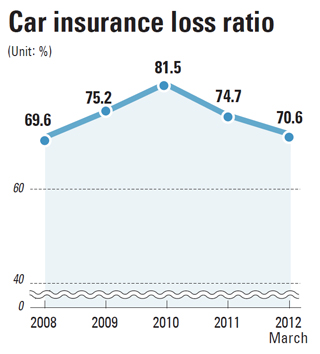 However, since last year, the policy holder when subscribing to an insurance policy could choose whether to burden 20 percent or 30 percent of the cost. The maximum ceiling on the cost burden that the policy holders take is 500,000 won.

Additionally, car accidents fell immensely as it snowed less than in previous year.

“Although the losses from car insurance have fallen significantly, we are still suffering from losses,” said Han Je-hee, an LIG Insurance official. “Most of the profits came from managing our assets.”

The insurers’ persistent claims that the profits resulted from exceptional investments on its assets is speculated as a move to seal off any pressure in lowering insurance payments.

Earlier this year, as the loss ratios on car insurance fell, non-life insurers lowered insurance payments on cars by 2 percent.

Some claims that the insurers have been nervous of the possibility that lowered car insurance payments may start a movement that would pressure the insurers to lower other policies.

“[The insurers] managed the assets while embracing risks and therefore this profit should not be passed on to policy holders,” said Ko Joong-boong, an official at KNIA.

“It is the same logic in saying that the losses that were generated from bad investments of assets would be transferred to customers by raising insurance payments.” 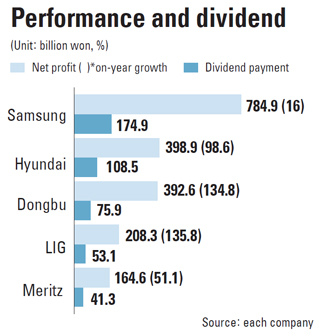 Although the insurers saw their profits inflate, they have been raising the insurance payments on renewed medical indemnity insurance policies.

Accoding to the KNIA, 11 non-life insurers have raised the insurance payments on renewed three-year maturity medical indemnity insurance policies by an average of 34 percent recently.

“As medical insurance has become popularized, the outflow of medical costs has increased significantly,” said an employee working at a non-life insurance firm speaking on the condition of anonymity.

“As the loss ratio has reached 110 percent, raising the payments on renewed insurance policies is inevitable.”

The insurance companies, however, are under fire since while they are busy trying to raise insurance payments when suffering from losses, they are busy handing huge dividend returns to management and shareholders when making profits.

The insurance firms are planning to pay a combined 453.7 billion won in dividends to their shareholders. This is 23 percent of the combined 1.9 trillion won net profits.

The Financial Supervisory Service in March called the heads of the non-life insurers to ask them to refrain from making huge dividend payments.

“The non-life insurers should be thinking of how to return the huge profits that they have made to the consumers, but they are showing a tendency to only take care of shareholders,” said Cho Nam-hee, secretary general of the Korea Finance Consumer Federation.

“The expanded profits made from asset managements are actually money that the insurance policy holders have supplied through their insurance payments and therefore it is appropriate that the profit should be returned.”