Na heckled at Players, slides down leader board

Na heckled at Players, slides down leader board 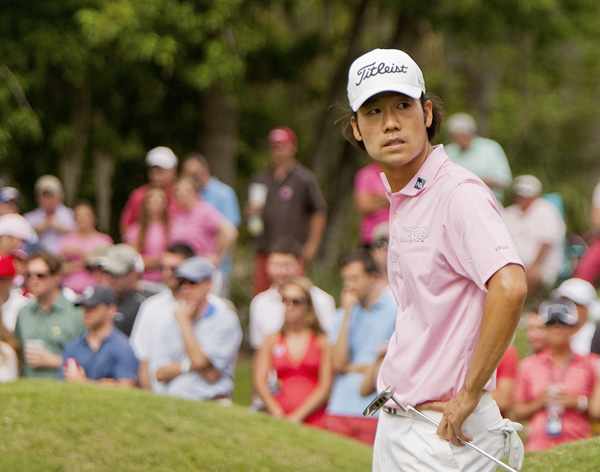 Korean-American golfer Kevin Na watches the leader board during the final round of the Players Championship PGA golf tournament at the TPC Sawgrass in Ponte Vedra Beach, Florida. on Sunday. [UPI/YONHAP]

The 28-year-old Korean-American even had one spectator tell him he “better not choke” because he had money riding on him.

Na dealt with it best he could, and even though he felt rushed at times, he never chastised fans at The Players Championship for his Sunday slide in the final round.

He blamed himself, just as he has all week for his countless waggles and his painfully slow pace.

Na closed with a 4-over 76, falling from first to a three-way tie for seventh and becoming the latest 54-hole leader to falter at the treacherous TPC Sawgrass. The third-round leader hasn’t won The Players since it moved from March to May in 2007.

“I deserve it,” said Na, who finished at 8-under 280 - five strokes behind winner Matt Kuchar. “I mean, I’m being honest. But is it fair? No. You put an average guy in between those ropes, trust me, they won’t pull back.”

Na faded early, too. He bogeyed four of final five holes on the front and wasn’t much better on the back.

When it was clear he was out of contention, Na hurried between shots in hopes of trying not to slow down playing partner Kuchar.

“It is what it is,” Na said. “I do need to work on what I need to. I do need to work on my pre-shot routine. I do need to play faster. But the average golfer has no clue how much pressure we’re playing under and how tough it is and how much of a fight it is mentally. I honestly think with all that going on, I did pretty well fighting. I had a good fight. I hung in there, so you know what, I just take the positives from it.”

Na took hundreds of waggles as he set up over the ball, backed off the shot if he didn’t feel comfortable and a couple of times purposely missed so he could start over.

Long known as one of the slowest players on tour, Na attributes his bizarre routine to a swing change. Nonetheless, fans showed little compassion.

Things got really ugly on the par-4 sixth.

“We had a clown on the sixth hole come up and say, after we just made bogey on five, he said, ‘I’ve got $2,000; you better not start choking,’?” said Na’s caddie, Kevin Harms. “This is a game of etiquette. It’s not basketball. It’s not football. Show some class. There’s no reason to do that to anybody.

“It’s not like he’s doing it on purpose. He feels more bad about it than anyone else, I can promise you that. He’s doing everything he can to get faster.”

“You know, when I’m over the ball, it would be nice if it was quiet,” Na said. “But just guys, you can hear them talking, like, ‘Pull the trigger, pull the trigger, hit it,’ which makes me back off even more. So that part was a bit tough.”

“I did not hear as much as heckling,” Kuchar said. “We talked a little bit about the Na last name and how many different versions he must here of ‘nah, nah, nah, nah’ or just different plays on his last name. So he said he’s pretty much heard everything, had a few giggles at some.’’