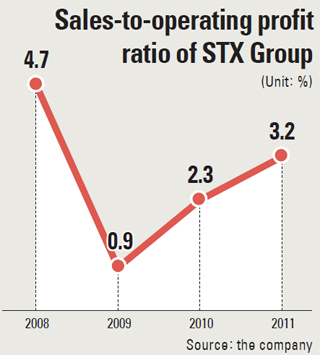 Long-ailing STX Group, which suffered severely from the 2008 global financial crisis, has decided to streamline its business portfolio as the industry recovers by selling a key overseas subsidiary and stakes in major projects to add liquidity.

The nation’s fourth-largest shipbuilder said Sunday that it is time to prepare for a recovery in the global shipping market since indicators seem to suggest it will pick up in the second half of the year. In total, STX wants to raise 2.5 trillion won ($2.17 billion) in order to improve its fiscal soundness and stabilize its balance sheet.

According to Korea Shipowners’ Association, the Baltic Dry Index (BDI), an indicator of demand for shipping capacity versus the supply of dry bulk carriers, has been slowly rising in the last five months. Rises in the index suggest growth in global demand for shipping, which consequently leads to increases in shipping fares. When the market is booming, the index exceeds 2,500.

Along with the BDI, a representative index for freight fares is also recovering, according to the association. The Shanghai Containerized Freight Index stood at 1,163.96 in early March, jumping by around 19 percent from late February. The index measures average fares for freight carriers between Shanghai and the western part of the United States.

Owing to such positive signs for, STX has decided to secure cash by selling off STX OSV and other unlisted subsidiaries in the country.

During the past four years, STX saw its sales-to-operating profit ratio tumble from 4.7 percent in 2008 to the lowest 0.9 percent in the following year. Since the group’s main businesses are shipbuilding and vessel renting, it was hard hit by the decline of the shipping industry. However, the company now asserts that its performance is improving as the market gets back on track.

STX OSV is a Norway-based shipbuilder whose main business is to manufacture special vessels used for operations of offshore plants. STX wants to sell the affiliate, which it values at 2 trillion won, for around 1 trillion won. One Italian and one Singaporean shipper have shown interest in the Norwegian company, STX said.

STX aims to raise the rest of its 2.5 trillion won goal by selling stakes in the group’s domestic subsidiaries and in some overseas resource development projects. It is also considering whether to place some less profitable vessels up for sale.

STX may even sell stakes in STX Heavy Industries, its core business unit, and STX Energy, which will be the subject of an initial public offering on the domestic stock market.

“Due to the severe recession in the market, there remain worries about our financial health. However, internal efforts to shore up our bottom line, including the planned sale of certain units, will help address the worries,” the company said in a statement.