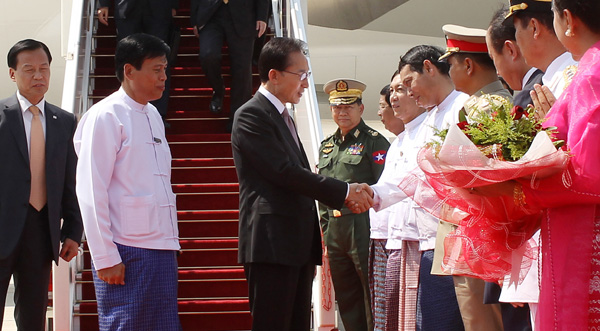 With yesterday’s state visit, Lee became the first Korean president to return to the country since the 1983 Yangon bombing. On his first day of the two-day trip, Lee had a summit and a dinner with Myanmar President U Thein Sein in the capital city of the country also known as Burma.

Lee will travel to Yangon today and meet with Daw Aung San Suu Kyi, one of the world’s most popular political dissidents. Lee will be the first Asian leader to meet with her since she was released from decades of house arrest.

“Lee’s visit to Myanmar is the first by a Korean president in 29 years,” said Kim Tae-hyo, senior presidential secretary for national security strategy on Sunday, stressing that the trip is taking place at a crucial moment for both countries.

“With the democratization of Myanmar and the government’s recent policy to open up the country, the United States and European Union are making fast moves to lift the long-imposed sanctions,” Kim said.

“Myanmar has traditionally maintained good relationships with China and India, but now it is looking for a new partner outside the region to develop its economy. We believe South Korea has the power to offer alternatives and pass on development know-how to Myanmar, who is in need for a partner on development, economic growth and democratization as well as encourage them to stop military cooperation with North Korea.”

At the summit, the two leaders hoped to capitalize on an important opportunity to develop a new relationship, the Blue House said in a press release on Sunday.

Lee and Thein Sein will also discuss economic and trade cooperation as well as cooperative projects to develop Myanmar’s rich energy and mineral resources. They were also to discuss the sensitive issue of ending Myanmar’s arms trade with North Korea.

According to Kim, Lee’s visit to Myanmar was realized at the invitation of President Sein during their meeting on the sidelines of the East Asia Summit in Indonesia last year.

Although no Korean leader has visited the country since the failed assassination attempt by North Korean agents against visiting South Korean President Chun Doo Hwan in 1983, leaders of the two countries have occasionally had meetings elsewhere.

On Oct.9, 1983, a powerful bomb set off by North Korean agents killed 17 senior South Korean officials, including the vice prime minister and foreign minister, and injured 15 others, including the joint chief of staff during President Chun’s visit to Aung San Cemetery in Rangoon, today called Yangon. Chun narrowly survived the assassination attempt, and Myanmar cut off its diplomatic ties with North Korea the next month.

In April 2007, Myanmar and North Korea restored their ties, as they were both under severe economic sanctions by the United States. North Korea is a suspected arms supplier to Myanmar, and the United States has made clear its concerns about the issue. During her December visit to the country for the first time in 50 years, U.S. Secretary of State Hillary Clinton made it clear that Myanmar must end its trade with the North’s military. Because of the peculiar nature of the Myanmar-North Korea relations - and because of the North’s 1983 bombing - the Blue House announced Lee’s trip only after he left Beijing for Myanmar.

Before his departure, Lee met yesterday morning with Chinese President Hu Jintao in Beijing and discussed the North Korea issue. According to the Blue House, the two leaders had a candid and fruitful discussion on issues concerning the Korean Peninsula, but agreed not to disclose the details.The Blue House said Hu made clear that denuclearization of the Korean Peninsula is China’s goal and that Beijing opposes the North’s nuclear test and launch of an intercontinental ballistic missile.

Lee reminded Hu that inter-Korean talks and China-North Korea talks would enter a completely different phase after the North arms itself with a nuclear weapon and a long-range missile, the Blue House said.

The two leaders also discussed the North’s GPS jamming of airplanes, which has continued for the past two weeks. They agreed to pay special attention to the operations of civilian airlines of the South, China and Japan and to exchange related intelligence between Seoul and Beijing to come up with a countermeasure.

A second round of the South Korea-China-Japan summit also took place yesterday before Lee departed for Myanmar. Although the three leaders showed concerns about North Korea’s latest long-range missile launch and the possibility of a third nuclear test, the joint declaration adopted after the trilateral summit did not include any condemnation toward Pyongyang at the request of China.

“China was very perplexed about including a direct warning or punishment toward North Korea in a joint declaration issued at an international meeting in Beijing,” Kim, the Blue House senior secretary, explained.