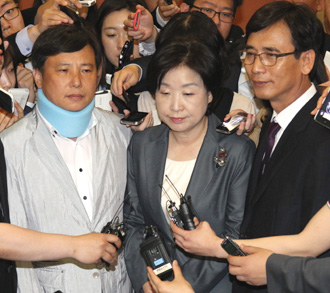 
The Central Steering Committee of the Unified Progressive Party voted yesterday to forfeit the candidacy of 14 members who were selected in the rigged primary in March for the party’s proportional lawmaker’s seats, including two elected members, in a desperate effort to contain the vote-rigging scandal that has bloodied the reputation of the country’s third largest party.

The committee also appointed Representative Kang Ki-kab as its interim leader. His move came prior to the promised resignation of the three remaining co-chairs, a move intended to let them shoulder responsibility for the vote rigging and put an end to intraparty strife.

“We expect our efforts to reveal to the nation our distorted and shameful incidents to become the basis of re-establishing correct progressive politics,” said Sim Sang-jeong, a co-chair of the UPP, during a press conference held at the National Assembly. The other co-chairs, Rhyu Si-min and Cho Joon-ho, also stepped down.

The committee passed two key items at the committee meeting - dismissing all proportional candidates and appointing Kang as the interim leader - through an online vote, after an “off-line” meeting by the committee on Saturday to vote on the same issue was disrupted by the members of the largest faction of the party and included physical attacks against Rhyu and Sim. 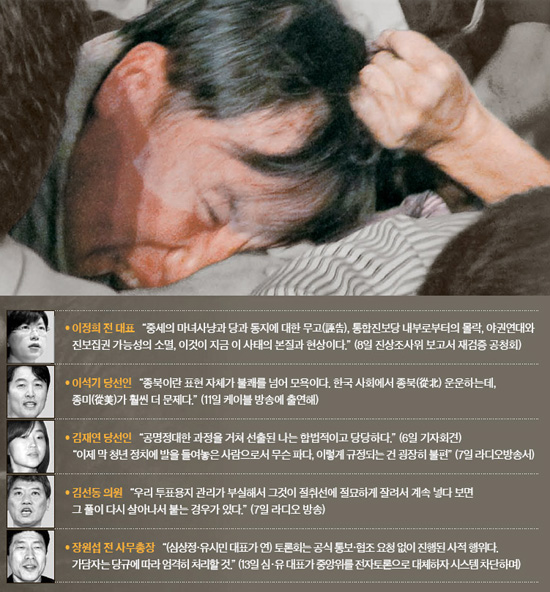 The two members of the largest faction, the Gyeonggi Dongbu Alliance, which is pro-North Korea, won the primary and were elected as proportional lawmakers from the UPP at the April 11 general election.

In the online committee vote yesterday, 546 of 912 committee members participated and 540 of them voted. Most of the Gyeonggi Dongbu Alliance did not participate in the vote. The faction has claimed that an earlier internal investigation of the party, which concluded that the online voting for the primary was rigged, is untrustworthy and the illegality of the primary voting should be re-investigated.

“It means nothing,” a spokesman of the UPP and mainstream faction member told the JoongAng Ilbo yesterday. “Kang Ki-kab’s emergency measure committee lacks legitimacy because the online vote [at the committee level] has no legal force.”

According to party sources, the mainstream faction is preparing to start a full-blown war with the non-faction members of the UPP and considers Kim Sun-dong a contender who can check the power of the newly elected interim leader Kang Ki-kab.

Kim, who detonated a tear gas canister inside the National Assembly’s main chamber in protest of the ratification of the Korea-U.S. free trade agreement, is a hard-line member of the Gyeonggi Dongbu Alliance. The UPP is forecasted to appoint Kim as the new floor leader as early as today.

Amid few signs that the mainstream faction will budge, some are raising the possibility that the internal strife of the UPP could become a legal battle over the legitimacy of the online vote.

Some see a legal battle as the best option for the mainstream faction. They can delay until May 31, a day before the opening of the 19th National Assembly. Their goal is to send Lee Seok-gi, reportedly a mainstream faction leader of the UPP, to the National Assembly. Lee and Kim Jae-yeon, the two proportional lawmaker-elects who won the primary, are refusing to forfeit their candidacies. Lee Jung-hee, another co-chairwoman who had supported Lee Seok-gi, resigned last week.

Splitting the party appears to be the next step, although neither the mainstream members nor the non-faction members have been vocal about it. They are concerned that the conservative parties will take advantage of it to sharpen their attack against the party.

The party’s central steering committee yesterday dismissed Jang Won-seob, the secretary general of the UPP close to the mainstream, to remove a potential threat to Kang’s leadership.

Meanwhile, the Seoul Central District Prosecutors’ Office yesterday said that they have ordered the Seoul Metropolitan Police Agency to investigate the violent brawl on Saturday.