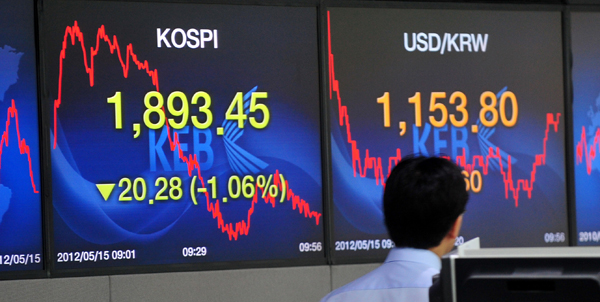 An employee at the Korea Exchange Bank’s Myeongdong branch in central watches Seoul’s main bourse tumbled below the 1,900 mark. [YONHAP]


Seoul’s main bourse tumbled below the 1,900 mark closing at 1,898.96 yesterday as growing jitters from Europe continued to drive foreign investors on a selling spree.

The 1,900 mark is considered a significant psychological barrier.

Market analysts cautiously predict that the downward momentum will likely to continue until Greece holds its second general election next month.

Yesterday, the market opened with the Kospi teetering at 1900; news that Greece may hold a re-election on June 17 pushed it below the threshhold in less than an hour.

A new election also increased worries that Greece may leave the euro zone, which contributed to pulling the stock market down further.

The news that Moody’s downgraded the credit ratings of Italian banks further fueled fear in the market and the Kospi bent as low as 1,882.16.

However, after noon the market started to stabilize, cushioning the drop to 0.77 percent at the market’s close.

The stock market has been on a downward spiral for five consecutive trading days.

Once again the Kospi proved itself vulnerable to an exodus of foreign investors.

In the first three months of this year, foreign investors were net buyers as they purchased more than 10 trillion won worth of shares. This helped the stock market rebound to the 2,000 mark quickly. In April, foreign investors turned into net sellers but their off-loading was limited to 29.5 billion won.

Starting in May, as the sovereign debt crisis in the euro zone resurfaced and the previous agreed austerity measures were threatened by political changes in France and Greece, foreign investors increased their offloading.

Analysts say the market doesn’t have enough positive news to turn it. The Chinese government’s efforts to spur its economy by adopting stimulus measures such as lowering the reserve ratio requirement for Chinese banks last week wasn’t enough.

“The market is absent the momentum that could really break the adjustment pressure,” said Cho Yong-hyun, Hana Daetoo Securities analyst. “Foreign investors’ offloading of shares will unlikely change before June.”

Analyst say the situation will likely stabilize once the new Greek election is held and the country’s trajectory becomes clearer.

Some analysts say the situation in Europe is overblown and that investors are reacting too sensitively.

“The euro zone problem can be summarized as two issues: confusion over policies and the possibility of Greece defaulting,” said Cho Byung-hyun of Tong Yang Securities.