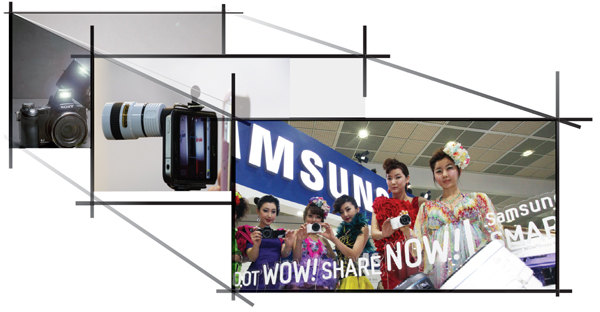 Park Yoon-jung, a housewife with two daughters, recently bought an iPhone 4S after wondering whether to buy a new compact camera or a smartphone. She heard the iPhone’s built-in camera was as good as compact cameras, which was all she needed to keep a photographic record of her preschool children.

“I thought, ‘If I buy the iPhone 4S, I get a new phone and a camera at the same time,’?” she said. “The 8-megapixel camera on the iPhone is just enough for me.”

Park is one of the growing number of people who have decided they don’t need a separate camera as long as they have a smartphone.

“Mobile devices are eating away at the space of the lower-end point-and-shoot cameras,” Umebayashi Fujio, chief executive of Nikon Imaging Korea, told reporters late last month. “The time has arrived for the entire camera industry to consider stepping up efforts to reform and innovate.”

The product leading the market now is the mirrorless interchangeable lens camera, a kind of hybrid of the digital single-lens reflex (DSLR) camera and the compact point-and-shoot cameras that led the market in recent years.

The new breed of imaging device is devoid of the mirror-based optical viewfinder seen in the bulky digital single-lens reflex cameras but offers DSLR-like quality imaging in a small body. Given its position in between compact and DSLR cameras, mirrorless cameras were called hybrids earlier.

Just three years after Panasonic unveiled the first mirrorless camera, the E-P1, all the major camera producers have rolled out models with resolutions from 10 megapixels to 24 megapixels. With exception to Japan’s Canon, a leader in the high-end DSLR market. Their prices are between those of compact and DSLR, from 200,000 won ($173) to several million won. And the camera makers are hoping mirrorless will become the next-generation cash cow. 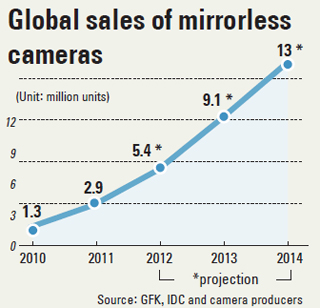 According to statistics from International Data Corporation, a market researcher, and camera producers, global mirrorless camera sales are expected to almost double to 5.5 million this year from 2.9 million last. In 2014, the number of mirrorless cameras shipped worldwide is forecast at 13 million, surpassing the figure for DSLRs.

“Mirrorless cameras have extracted and adopted the advantages of DSLR and compact cameras,” said Hong Ji-eun, a corporate communication team manager at Sony Korea. “Thus they have overcome the weight issue of DSLRs and normally unsatisfactory resolution quality of compacts.”

With Sony controlling almost one third of the Korean mirrorless camera market in the first quarter of this year, other companies are trying to catch up. During the last five months Fujifilm Electronic Imaging Korea released the X-PRO1, its first mirrorless camera, Panasonic introduced the Lumix GX1 while Sony came up with the high-end model NEX-7 with a 24-megapixel lens.

“A camera’s two key roles are recording and expression,” Im Hoon, vice president of the Fujifilm’s Korean operation, said in February at the launch of the X-PRO1. “The former has mostly been covered by compact cameras, which in Korea are being replaced by smartphone cameras. The latter, on the other hand, is in constant demand because the demographic of people eager to expand their artistic horizons using higher-end cameras such as DSLR and mirrorless is on the rise,”

The Japanese company projects 60 percent of its annual sales, targeted at 35 billion won, will come from mirrorless cameras, with the remaining 40 percent coming from compacts.

Samsung Electronics, in a move to distinguish itself from other mirrorless camera producers, put Wi-Fi connections in three new models. Compact cameras from Samsung as well as Sony and Nikon already carried the feature but none in the mirrorless camera segment did.

“With existing camera models, you ended up taking photos and saving them on your computer’s hard disk, but the new cameras enable you to edit the photos right away and transmit or share them over the Internet,” said Han Myoung-sup, head of Samsung’s digital camera operation. 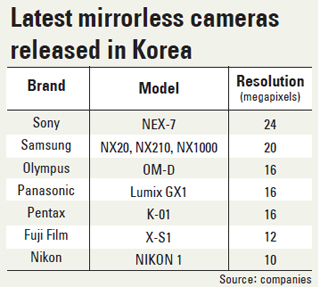 With an ambition to turn cameras into a “crucial communication tool,” Samsung aims to put Internet connectivity in its entire camera lineup. Only 3 percent of digital cameras had Wi-Fi as of 2010, data from IHT iSupply, a market researcher, showed.

Some analysts and even camera industry insiders consider Internet connectivity not very important for cameras. “Not many would buy a camera just for the Wi-Fi connection,” said a spokesperson with one of camera producers. “It will just be part of many optional elements of a camera.” IHT iSupply says the portion of Wi-Fi-enabled cameras is projected to grow to just 16.3 percent in 2015.

Samsung aims to see its market share in the mirrorless camera segment surpass 20 percent and then become No. 1 in the world by 2015, Han said.

Canon, the top player in the Korea’s DSRL market for the past nine consecutive years, is dubious about mirrorless cameras. When asked about rumors that it plans to announce one later this year, a Canon Korean spokesman said he could not confirm anything.

“The mirrorless camera boom isn’t really widespread across the globe,” he said. “It’s currently limited to some Asian countries such as Korea and Singapore and we still need to wait and see.”
By Seo Ji-eun [spring@joongang.co.kr]