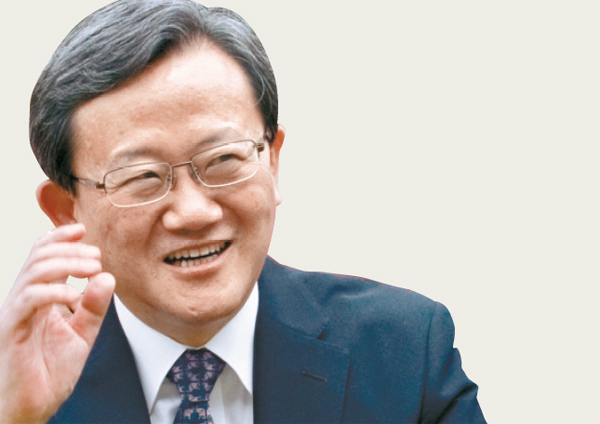 
Chinese Classics Education Professor Lee Myung-hak, 57, won the 1st Korea Teacher Award on Friday and was surrounded by foreign students who came to congratulate him at an award ceremony at the Seoul Cultural Center in southern Seoul.

But five of the students who cheered for joy when the professor received the prize were not from his classes, but came and studied in Korea thanks to the Korean essay writing competition that Lee established in 2007 when he was the dean of the College of Education at Sungkyunkwan University.

The Korea Teacher Award, which was established for the first time this year by the Ministry of Education, Science and Technology, is a combination of two awards that the ministry was giving out until last year. The winner of the award will receive a presidential citation, a medal and 10 million won ($8,667) in cash.

In 2007, Lee heard that Korean language departments were established in about 70 universities in Korea due to the Hallyu, or Korean Wave, boom. Upon hearing this, Lee said he began to think about ways to sustain such a boom in China, Mongolia and Central Asia, and not let it wither.

The idea of establishing a “Korean essay contest” crossed his mind. Putting the idea into action, he decided to give scholarships and a chance to come and study at the Sungkyunkwan University to the winners of the competition.

“In June 2007, when I went to Beijing to hold the first competition, I was still half in doubt that this would be successful. But it was such a hit that I had no choice but to continue,” said Lee.

The competition, which started in Beijing, expanded to Ulan Bator in Mongolia, Almaty in Kazakhstan and Tashkent in Uzbekistan. Rumors that the winners of the Korean essay competition would get a chance to study in Korea prompted universities in China and Central Asia to broaden their Korean language programs.

According to the students at the award ceremony, the essay competition was even called the “competition of dreams,” among students in these countries. Each university selects one or two students with the best Korean writing ability through their own competition and allows them to compete with other candidates from other universities.

Zou Ying Shi, 24, from China, graduated from Guangdong University of Foreign Studies and was working at a South Korean consulate office in Guangdong when she entered in the competition through her university. Now she is enrolled in a freshman course for journalism at Sungkyunkwan University and said she hopes to become a Chinese reporter who can write about Korea accurately.

Gao Nan, 26, also from China, graduated from the Korean language department at Tianjin University’s College of Education, and has been in Korea for three years.

“It was my dream for a long time to come and study in Korea. Had it not been for the essay competition, I would never have the opportunity to come to there. My life would have taken a different route,” said Gao Nan, who also studies journalism at Sungkyunkwan University.

She plans to write her thesis by analyzing the advertisements of fashion magazines published both in Korea and China.

“The screening takes place next month. I’m already so nervous. But my friends said they’ll cheer for me,” said Gao Nan.

Elvira Memetova, 24, from Tajikistan, said she went to Uzbekistan in 2009 after hearing that the Korean essay competition would be held there. She received the gold prize.

“The topic of my essay was ‘Mother’ and I received the top prize that I never imagined I would. Through that, I was able to come to Korea and now I have a broader perspective on the world,” said Memetova.

Professor Lee was nominated as the winner of the 1st Korea Teacher Award, not only because he successfully established the Korean essay competition, but also due to the recognition of his lecture, “The World of Hanja (Chinese Characters) and Hanmun (Chinese),” among the five best university lectures by SBS. His lecture was also listed among the “100 best lectures” by the Korea Educational Development Institute.

Recently, Lee said that he received a letter from a student he taught 30 years ago. The student, who identified herself as a “Class of ’82 student from the Department of Clothing” wrote in the letter that “my daughter entered Sungkyunkwan University and I strongly recommended her to take your classes.”

She continued in the letter that, “although I’ve never visited you individually, I loved your lectures and I was so happy that my daughter could listen to them too.”

Lee’s tendency to donate to schools may have also aided his ascent to teacher-of-the-year status. He already said he’ll donate all 10 million won of the award money he will receive through the Korea Teacher Award for scholarships to Sungkyunkwan University.

He donated the 3 million won he received for being selected in the 100 best lectures for scholarships as well.

In June of last year, Lee donated 1 billion won, which he and his brother received as an inheritance from their father, to Joongdong High School, where the two brothers graduated. The high school was able to use the donation from the Lee brothers to help senior students from underprivileged families to pay for university tuition early this year.

“My father wanted that 1 billion won to be given to students from a poor background who attend the high school my brother and I graduated from,” said Lee.

“That was nearly all the cash I received from my father as inheritance and I was more than happy to give it to the students.”

“The only thing that troubles my heart is that I couldn’t expand the Korean essay competition to more countries such as Vietnam, the Philippines and Thailand,” said Lee.

“I don’t want Hallyu to end as just a fad and the only way to make it possible is to allow foreigners to learn and love the Korean language.”