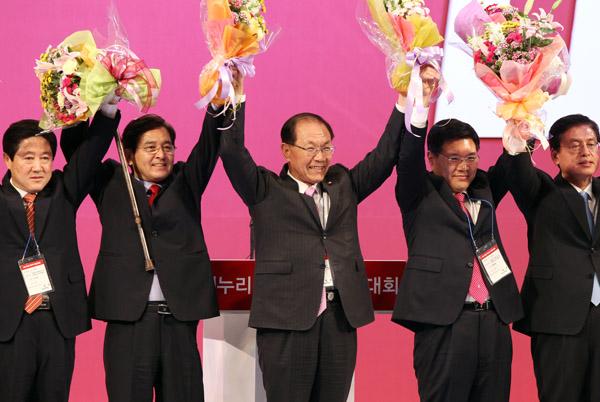 Along with other candidates, Hwang Woo-yea, third from left, reacts after he is elected the new chairman of the ruling Saenuri Party yesterday at a party convention held at the Kintex in Ilsan, Gyeonggi. [YONHAP]


Five-term lawmaker Hwang Woo-yea was elected yesterday the new chairman of the ruling Saenuri Party at the party’s national convention held at the Korea International Exhibition Center in Ilsan, Gyeonggi.

“The real winner of this convention is not me but the people and party members who are sincerely hoping to see the Saenuri Party in harmony and also reformed,” Hwang said. “I will keep party reform as my top priority.”

Hwang, a 65-year-old lawmaker currently representing Incheon’s Yeonsu District, was the party’s floor leader over the past year. He studied law at Seoul National University and passed the bar exam in 1969. After serving as a Seoul court judge, he started his political career in 1996 when he became a proportional representative in the National Assembly while he served as a chief secretary to Lee Hoi-chang, who ran in the 1996 presidential election on the ticket of the Grand National Party, the predecessor of the Saenuri Party. Since 2000 Hwang won four consecutive lawmaker elections in the geographical constituency of his hometown of Incheon.

Hwang and three of the four Supreme Council members are part of the pro-Park Geun-hye faction of the party, including Lee Hye-hoon. Last week, the ruling party elected Lee Hahn-koo - dubbed Park’s economics tutor - as its new floor leader.

The newly elected leadership brings an end to the party’s emergency council that was led by Park since December.
By Lee Eun-joo [angie@joongang.co.kr]