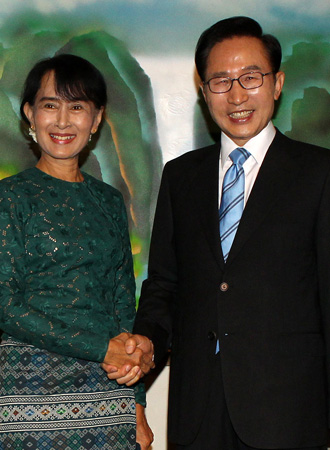 South Korean President Lee Myung-bak, right, shakes hands with Myanmar opposition leader Aung San Suu Kyi, left, before their meeting in Yangon yesterday. Lee and Suu Kyi stressed that democracy and the economy must prosper together, not at the expense of one another. [YONHAP]

YANGON, Myanmar - President Lee Myung-bak yesterday met with Daw Aung San Suu Kyi, the opposition leader of Myanmar and one of the world’s most admired political dissidents, to assure her of Korea’s support for the Southeast Asian country’s democratization and development.

After a 40-minute meeting, Lee and Aung San Suu Kyi held a joint press conference and stressed that democracy and the economy must prosper together, not at the expense of one another.

Expressing his respect for her tireless efforts to bring democracy to Myanmar, Lee said in the news conference that their meeting allowed him to truly understand the country’s situation.

According to the Blue House, Lee also asked her to visit Korea in the future.

“One thing I pointed out during our meeting was that democracy should never be sacrificed for economic development,” Lee said in Korean. “Democracy is as important as the economy, and she completely agreed.”

Referring to Myanmar by its former name, Lee said, “It is my sincere hope that people here in Burma will live much freer and better lives and her dream and aspiration for a democratic Burma will be realized as soon as possible.”

Suu Kyi, in a green traditional custom and wearing four white flowers in her hair, gave a short speech in English to express her appreciation for Lee’s visit and Korea’s support for Myanmar’s democratization.

Korea and Myanmar have many things in common, but the Korean people’s love for justice and freedom mirrors that of the Burmese, the 66-year-old leader said. “We want justice and freedom and we want prosperity,” she said. “Not either of it, but all of it together.”

“President Lee understands perfectly that prosperity is no substitute for democracy,” she said. “And moreover, we are agreed on the importance of education.”

Suu Kyi said she wants the children of her homeland to have access to the kind of education that will allow them to build their own futures.

In her speech, she also stressed that her homeland is at a crucial point of transition, and she appreciates the world’s good will and support. “We have to make sure that we do not dissipate this good will,” she said. “And that we put it to the best use possible by making sure that it is used in the best way possible, which is for the sake of our people, not for any group, not for any individual, not for any organization, not for any one government, but for the people.”

After more than six decades of British and Japanese colonial administrations, Myanmar became independent in 1948. The country has been under military dictatorship since a coup in 1962 led by General Ne Win.

In 1988, a pro-democracy movement swept the country, known as the 8888 Uprising, and Suu Kyi, daughter of the country’s independence hero, General Aung San, emerged as the main pro-democracy leader. Her National League for Democracy won a general election in 1990, but the junta nullified the results.

She won a landmark by-election victory last month, leading her party National League for Democracy to win 43 out of 45 seats contested.

Since then, she has met a number of foreign dignitaries. Lee was the first Asian leader to meet with her in Myanmar.

Lee laid flowers at the grave of General Aung San.

“I am the first guest on a state visit to Myanmar after the new government was launched,” Lee said. “I believed it is a courtesy to pay a visit to the grave of General Aung San, known as the father of the country.”

“And here is also the place where the sacrifice of 17 senior Korean officials took place, an unimaginable incident in the 20th century. I hope this will comfort the families of the fallen officials - this unfortunate history must never be repeated.”

The international media reported last week that Suu Kyi was given a passport for the first time in 24 years. She plans to go to Norway in June to accept the Nobel Peace Prize she won in 1991.

It remains to be seen if she will visit Korea in the near future by accepting Lee’s invitation. She reportedly has a plan to travel to Britain, where she lived with her late husband and sons before returning to her homeland in 1988 to visit her sick mother.