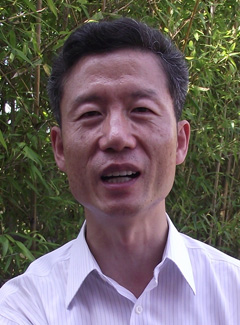 A leading propagator of North Korea’s ruling ideology in the South in the 1980s and 1990s, who had a change of heart and became an activist against the North’s regime, has been held captive in China, according to the government and his fellow activists.

Kim Young-hwan, 49, and three other activists for human rights in North Korea were arrested in Dalian, Liaoning Province, on March 29 and have been detained by the Ministry of State Security in Dandong, said the Seoul-based Network for North Korean Democracy and Human Rights in a statement late Monday.

Seoul’s Ministry of Foreign Affairs and Trade confirmed the report.

Kim and his fellow activists were reportedly trying to help North Korean defectors.

“We will continue our diplomatic efforts for China to conduct legal procedures for the four people as swiftly and fairly as possible,” Foreign Ministry spokesman Cho Byung-jae told reporters.

Kim was a central figure in the National Liberalization faction, a student movement against dictatorship in the 1980s that also believed in North Korea’s juche (self-reliance) ideology.

He preached the juche ideology at South Korean colleges in a series of letters he wrote under the nom de plume “Steel.” The letters, which started in 1986 and quickly became a bible for pro-North Korea, anti-military regime college students in the late 1980s.

In the letters, Kim wrote, “How is steel tempered?” His answer was that one crackdown after another by the military regime would harden people fighting the dictatorship.

After returning from a secret trip to North Korea in 1991 - North Korea brought him to Pyongyang via submarine - Kim created the Revolutionary Party for People and Democracy, but he later developed skepticism about the North and dissolved the party in 1997.

He was arrested for the group’s activities in 1999, but released after saying he had “converted to democracy.” Since then he has worked for human rights and democratization in North Korea.

The Network for North Korean Democracy and Human Rights, where Kim has worked as a researcher, said Kim left South Korea on March 23. It was unclear whether the other three activists - Yu Jae-gil, 44; Kang Shin-sam, 42; and Lee Sang-yong, 32 - were with Kim at the time of their arrest.

The group did not say what the four were doing in China, only saying they were detained on a charge of being a “threat to the national security” of China. The Foreign Ministry also said it hadn’t been told what they were detained for.

A source in China told the JoongAng Ilbo that their work was related to North Korean defectors.

“We ask the Chinese government to follow international law and allow the South Koreans to meet with a consul and family members,” the network said in a statement.

Foreign Ministry spokesman Cho said the South Korean consul general met Kim on April 26 and found him healthy and unharmed. He said China claimed the other three did not want to meet a consul or a lawyer, and Seoul is trying to confirm that.

It’s not known whether the Chinese authorities knew who Kim was at the time of his arrest. Another Seoul official told the JoongAng Ilbo that Kim’s history may not affect China’s treatment of him.

“There’s a number of cases of people arrested for activities related to North Korean defectors in which they are released in the form of deportation after China finished its investigations,” the official said.

But some diplomatic observers are raising the possibility that North Korea, which has been more sensitive to defector issues since Kim Jong-un assumed power, may demand China impose heavy punishments on the four.
By Moon Gwang-lip, Kim Su-jeong [joe@joongang.co.kr]