For Yoo Young-kuk bold abstractions were works of precision

For Yoo Young-kuk bold abstractions were works of precision 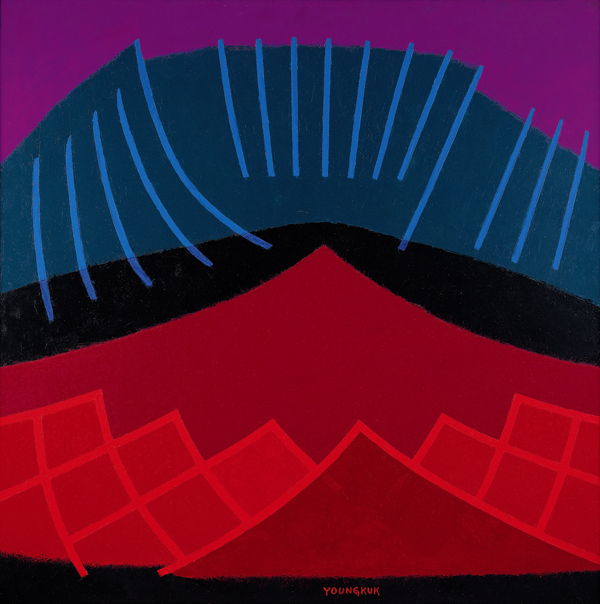 “Mountain” (1979) by Yoo Young-kuk is part of a retrospective exhibit for the painter, who was one of the leaders in Korean abstract art along with Kim Whanki. The show runs through June 17 at Gallery Hyundai’s Gangnam branch in southern Seoul to memorialize the 10th year since Yoo’s death. Provided by the gallery


From tomorrow, the large abstract paintings of Yoo Young-kuk, mostly bold-colored geometric shapes, will be up for display to memorialize the 10th anniversary of the artist’s death.

The roughly 60 paintings in the exhibition at Gallery Hyundai’s Gangnam branch in southern Seoul show how the works of one of Korea’s most important first-generation abstract painters evolved over time.

The paintings of his abstract expressionism period (1957-67), such as the 1965 oil “Spirit,” consist of color fields filled with light. But from the early 1970s, they were geometrically abstract and based on nature - especially the mountains in Uljin County, North Gyeongsang, where he was born. 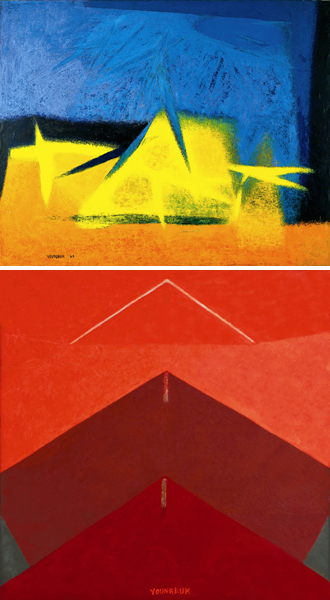 Many of these later works have triangular shapes filled with deep red and bluish green colors. They appear to be abstractions of “The Sun, Moon, and Five Peaks,” an iconic and highly stylized Joseon-period image that decorated screens behind the thrones of kings.

Yoo’s more Western-style paintings have some Korean elements, too, though the artist sought to incorporate universal and fundamental themes in his art rather than regional ideas.

He once said in a note that, “The subject of my oeuvre is nature, which I have explored through non-figurative forms. That is abstraction. It is nature, not as a particular subject, but as lines, planes and colors.”

In his philosophy, Yoo shared some common points with French post-Impressionist Paul Cezanne, who said that everything in nature could be represented in the forms of cylinder, sphere and cone.

And so does he with Dutch abstract artist Piet Mondrian, who sought to express the fundamental and unchangeable beauty and truth lying beneath nature’s complicated forms and colors through grids of black lines, the three primary colors and white space.

Yoo’s paintings also show restraint of emotion in their careful choice of color and composition. The artist, like Mondrian, was rigorously self-restraining in his paintings, just has he was in his everyday life.

According to Lee In-bum, an art critic and professor at Sangmyung University, Yoo kept working hours while painting, just like a factory employee.

“With no exception, at eight O’clock in the morning, he would go to his studio and then leave it to have lunch at noon and then go back to the studio to work until 6 p.m.,” Lee wrote in “Yoo Young-kuk,” a bilingual book in Korean and English about the artist. It was published to coincide with this exhibition.

Lee also said that when Yoo felt his professorial jobs at Seoul National University and Hongik University took up too much time and kept him from painting, he quit them without hesitation.

“They were all romantic in their own ways, whereas Yoo had a totally different attitude. In life and in art, he left no room for romantic myths.”