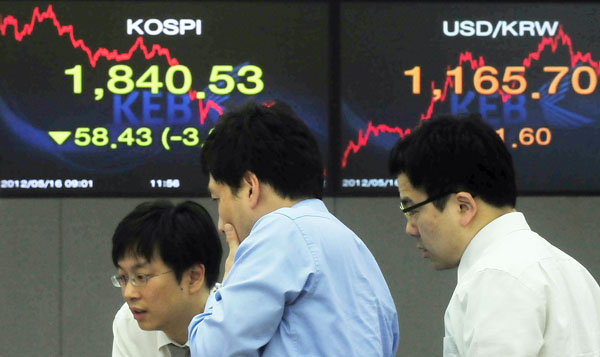 Due to increasing chances of Greece being forced from the euro zone after it failed to form a coalition government, the Kospi plummeted by 58.43 points or 3.08 percent from a day earlier, closing at 1,840.53 yesterday. [NEWSIS]

The Kospi nosedived by 58.43 points from the previous day to barely hold the 1,840 mark yesterday.

Breaking the 1,880 mark early in the morning, the Kospi continued to tumble throughout the afternoon, closing at 1,840.53. Right before closing, the figure briefly tripped below the 1,840 line but moved back at the last minute. It was the first time the market fell below 1,850 since Jan. 11, when it closed at 1,845.55.

“As Greek risks are amplified, uncertainties are increasing in the stock market, causing investors to panic,” said Kim Se-joong, an analyst at Shinyoung Securities. Some analysts predicted the Kospi could slide below the 1,840 level.

Global financial institutions are releasing forecasts that Greece’s exit from the euro zone is looming.

Citigroup’s analysts concluded that there is a 75 percent chance that Greece will abandon the euro in a recent report.

Greek President Carolos Papoulias acknowledged the failure to form a coalition government Tuesday and announced another round of elections, which are expected on June 17. He also reported some 700 million euros ($894 million) were withdrawn from major banks in the country as of Monday.

If the Greeks vote in a left-leaning government in June, which would be expected to reject conditions demanded by the IMF, Greece faces the risk of being ousted from the single-currency bloc.

When news spread that Greece failed to form a new government, European stocks slumped and the euro took a nosedive to a four-month low of $1.28.

According to AFP, IMF chief Christine Lagarde raised the possibility that debt-stricken Greece could leave the union.

“If the country’s budgetary commitments are not honored, there are appropriate revisions to do, which means either supplementary financing and additional time or mechanisms for an exit, which in this case must be an orderly exit,” Lagarde was quoted as saying.

However, Greece won some support from Europe’s most powerful economies on the same day. German Chancellor Angela Merkel and newly elected French President Francois Hollande said they want to keep Greece in the currency bloc in their first talks held in Berlin Tuesday local time.

Germany and France are ready to “study the possibility of additional growth measures in Greece,” Merkel said.

In Korea, the Ministry of Strategy and Finance said it will closely monitor the European situation and devise measures to reduce any adverse impact on the Korean economy.

“Korea needs to make consistent efforts to maintain growth in the long run, while monitoring external risks closely at the moment,” Bahk said. The minister has set a growth target of 3.5 percent early this month.

Since the struggling European market accounts for 10 percent of the country’s exports, Bahk said finding new markets is important.

Bahk said the country’s labor market is improving as 455,000 new jobs were added to payrolls in April, with 24.75 million Koreans employed.

Bahk said the number of people being employed is on the rise in most industrial sectors, and the jobless rate is falling in most age groups, including young adults.
By Song Su-hyun [ssh@joongang.co.kr]