Google Plus touches down

Google Plus touches down 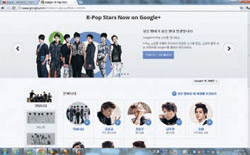 Google Korea has introduced a Korean version of Google Plus, its social network, for iOS and Android operating systems - 11 months after the service’s global launch.

An English-language version of Google Plus (plus.google.com) has been available since last June, but the Korean version for mobile gadgets was delayed as “it took time to comply with regulations set by the Korean government,” Lois Kim, head of corporate communications at Google Korea, said at a press conference yesterday.

In contrast, Japan had a Japanese-language app set up in tandem with the global launch of the site last year, while China, which is notoriously sensitive about Web security, has yet to approve one. At present, Google Plus has 170 million users worldwide.

Ted Cho, engineering site director of Google Korea, said a number of features distinguish Google Plus from other social networking services such as Facebook or Twitter. These include Circle, a function that enables users to classify contacts into different groups such as friends, family members and acquaintance, and control who can view their postings. Facebook is different in that it requires users to choose a certain exposure level before making each posting.

Cho also mentioned Hangout, a video chatting service that makes it possible for up to 10 people to have a group chat, as another benefit bestowed by Google’s service.

Meanwhile, K-pop Hub will accommodate four idol bands - Beast, Sistar, After School and Infinite - in its initial phase. The band members can upload their latest news, music videos and have chats with fans across the globe using the Hangout feature. The service will be available in Korean, English and Japanese, according to Google Korea, and more entertainers are expected to join soon.