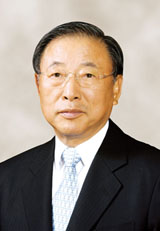 Speaking at an annual meeting of business leaders from Korea and Japan in Osaka in Japan yesterday, Cho underscored the importance of a free trade agreement between the two nations to encourage other such pacts in the region.

“In order for Asia to succeed .?.?. Korea and Japan should first sign an intensive free trade agreement and have it serve as the template for market consolidation in Asia,” Cho said. “Through this, we must create a massive, united market with participation by all Asian nations.”

In a statement, Hyosung Group explained that Cho advocates Korea and Japan agreeing on a “strong” free trade pact before FTA talks among Korea, China and Japan proceed because China is likely to “advocate a low-level free trade pact.”

“Since the global economic crisis, there has been a realization that Asian countries cannot maintain a growth model dependent on exporting to U.S. and European markets,” Cho said. “The time has come for Asia to play a main role in international economic growth by increasing regional trade and domestic consumption.”

On Monday, Korea, China and Japan called for the three countries to kick off negotiations this year on a three-way free trade agreement.

The pact, if realized, would create one of the world’s largest markets as Korea, China and Japan account for 20 percent of global gross domestic product and 17.5 percent of global trade.
By Lee Jung-yoon [joyce@joongang.co.kr]