Multinational firms such as P&G, Nestle and Unilever are global leaders and make the Fortune Global 500 every year. But there’s one country where they are increasingly struggling to compete against local companies: Korea.

Despite famous brands, technologies and decades of marketing expertise, they find it increasingly difficult to please Korean consumers who are finicky and fickle.

Market analysts say that multinational companies’ long planning and decision-making processes prevent them from quickly rolling out products tailored to fast-changing consumer trends in Korea, and they don’t do promotions at local discount chain stores, where homemakers choose detergents and other household products at discounts. They also get free samples in the stores.

Proctor & Gamble (P&G), which ranked 26th place on the Fortune Global 500 last year, is a case in point. P&G’s Whisper is now the third most popular sanitary pad on the market after it lost its No. 2 position to LG Household & Health Care’s Body Fit in 2010.

Yuhan Kimberly dethroned P&G Whisper’s No. 1 standing in 1999 with a new product called White, which was made after serious market research on Korean consumers. In the past, promoting sanitary pads through TV ads featuring celebrities was the norm in Korea, but Yuhan Kimberly captured consumers’ attention by featuring ordinary female college students who gave their frank thoughts about sanitary pads.

P&G’s Whisper used to be synonymous with sanitary napkins among Korean women, and in 1995 it had 50 percent of the local market. P&G’s shampoo and conditioner brand Pantene currently is No. 3 in the market after losing its long held No. 2 position to LG Household & Health Care’s Elastine in 2008. According to Nielson Korea, Pantene only controlled 15.1 percent of the market last year, and the gap between the two market leaders has become wider with Amore Pacific controlling 32.6 percent of the market and LG 31.3 percent. In 2007, P&G’s Pantene had a 22.8 percent market share behind market leader Elastine from LG Household & Health Care, which had 25.5 percent.

Nestle, which was ranked 44th on the Fortune Global 500, has numerous popular brands including Nescafe, Taster’s Choice and baby-food brands Nan and Gerber. But its glory has also faded. The instant coffee market has long been a two-horse race between Dongsuh and Nestle, but new player Namyang Dairy ousted the Swiss maker from the No. 2 position with French Cafe mix in June 2011. Nestle’s Taster’s Choice had maintained the No. 2 position in Korea’s “coffee mix” market, slim pouches of ground instant coffee with cream and sugar, since it entered into the market 30 years ago.
“One of the key reasons why a multinational company isn’t doing well compared to the past is lack of variety and innovation,” said Kim Hong-tei, a spokesman for Namyang. “Local coffee mix makers rolled out smaller packages of 10 and 50 units to target the growing number of one-person households. They conduct taste tests with consumers every month to identify changing tastes, so they can quickly roll out products with improved taste. Multinational firms lack that system because they sell the same products worldwide.” 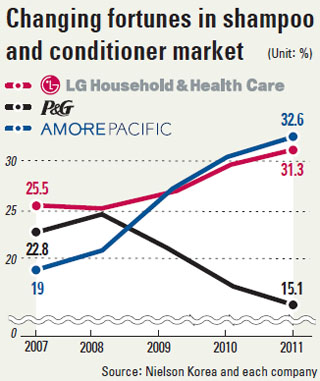 Unilever, which ranked 136th place on the Fortune list, is another frustrated multinational corporation. Its sales of Dove body wash aren’t doing well. Dove was the market leader in Korea until 2006. The following year, Amore Pacific and LG Household & Health Care outstripped it and Dove now only has a 10 percent market share.

“We can’t create a product solely dedicated to Korean consumers because we don’t have manufacturing here and we sell the same products worldwide,” said an official at a multinational corporation who asked not to be named.

“Some multinationals ambitiously announce their new year business plans to the press every January as a way to promote their products to the public,” he said, “but we’re not allowed to do this until April when our headquarters sets out plans for foreign operations.”

Retailers said if multinational firms want to reclaim their leadership in Korea, they should be more aggressive promoting their products at discount chains.

“When choosing detergents, snacks and drinks, consumers tend to buy products of makers that lower prices and give away freebies at booths set up for special promotions at discount chains ,” said Koo Do-yeon, a spokesman for Homeplus. “Whereas Korean brands are aggressive in promoting their products in this way, multinational firms lack this type of marketing strategy.”