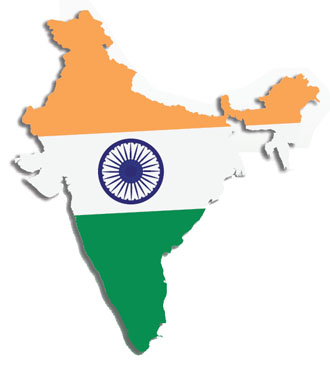 Korean automakers and electronics companies have established a commanding presence in India in recent years, but this dominance is coming under threat from Japanese rivals that are ramping up their investments and M&As in the populous country.

Although Korean products are widely used in India, Japan already outranks its smaller neighbor in terms of its total investment there.

Based on cumulative spending of $7.7 billion as of last November, Japan now stands as the fifth-largest investor in India after Mauritius, Singapore, the United States and the United Kingdom, in that order, according to the Reserve Bank of India.

Between April and August 2011, Japanese companies invested $2.5 billion in India, a 60 percent increase from 2010.

And the number of Japanese companies doing businesses in the country has almost tripled since 2006 to reach 812 in 2011, according to the Japanese Embassy in India.

This could spell bad news for Samsung Electronics, which owned 30 percent of India’s flat screen TV market as of last year and 44 percent of the nation’s market for 3-D TVs.

As of this February, it also controlled 26 percent of the handset market there, up from 17.9 percent in 2010.
Meanwhile, Hyundai Motor Group is the second-largest auto seller in India with a 14.3 percent share of the domestic market - a figure that could drop if rivals such as Toyota step up their game from the current 6.6 percent.

According to the Japan External Trade Organization (Jetro), 86 percent of Japanese companies currently operating in India plan to expand their businesses there this year.

“Japanese companies have recognized there is a need to expand their export market after the recent global economic crisis,” said Koo Bon-kwan, a research fellow at Samsung Economic Research Institute.

“They need a market with a high population, rapid growth and political stability to sell a lot of their products, and that is India.”

With a population of 1.2 billion and annual economic growth of 8 percent - second only to China on both counts - India’s lucrative market is being aggressively targeted by both Korean and Japanese businesses.

However, the latter have been changing their strategies to gain a competitive edge.

Whereas before they focused on making high-end, high-profit products for select customers, they are now aiming for high-volume sales of products with lower per-unit profit margins, Koo said.

According to the Korea Trade-Investment Promotion Agency (Kotra), Jetro is encouraging its companies to benchmark the tried-and-tested strategies deployed by Korean firms while also urging them to localize to establish stronger sales networks.

“The key to Korean companies’ success is partly due to using local celebrities for their advertizing campaigns, as well as commissioning some responsibilities to local administrators,” Jetro analyzed in a report. “Additionally, the frequent release of new products and aggressive decision making has contributed to their market expansion.”

The Japanese are also pushing for more joint ventures with Indian companies to minimize investment risks. Mitsubishi Electric announced in January that it had acquired India’s Messung Group, which makes programmable logic controllers for industrial machines.

“Entering a market through an M&A or joint venture gives [companies] quick access to a basic business infrastructure, such as a local distribution network,” said Park Min-joon, a director of Kotra’s Asia-Pacific team. 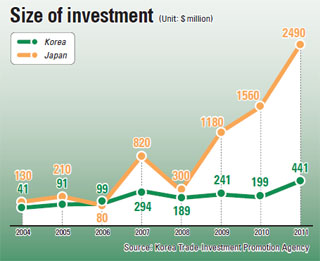 Japan provides over 200 billion yen ($2.49 billion) of its tax money in the form of official development assistance to help its companies grow in India.

When Japanese Prime Minister Yoshihiko Noda visited India last year, he announced that $4.5 billion will be spent on building a 1,483-kilometer (921-mile) industrial corridor stretching from New Delhi to the financial hub of Mumbai to help transform the country’s economic landscape. 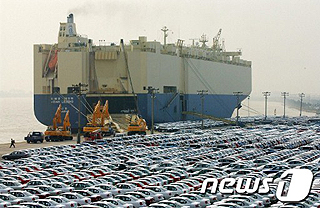 Despite the stiffer competition, however, neither Samsung Electronics nor Hyundai Motor plan on changing their business strategies as they both seek to expand their shares in India and other emerging markets.

“We will stick with our basic agenda of expansion irrespective of which companies join the fray,” said Gwon Seung-han, assistant manager at Samsung Electronics’ communications division.

“Growth in the auto sector has been declining due to inflation and instability in terms of currency exchange, as well as global economic uncertainty,” said one official at Hyundai Motor Group.

“Moreover, the Indian government is adopting half-hearted measures to support the auto industry. It even increased consumption tax for car purchases.”

Bae Chang-heon, a managing director at Kotra’s global business information division, said that benchmarking the opposition’s strategies can also work in Korean companies’ favor. “[To learn lessons from them] We need to study what Japanese companies are doing there,” he said.
By Lee Sun-min [summerlee@joongang.co.kr]