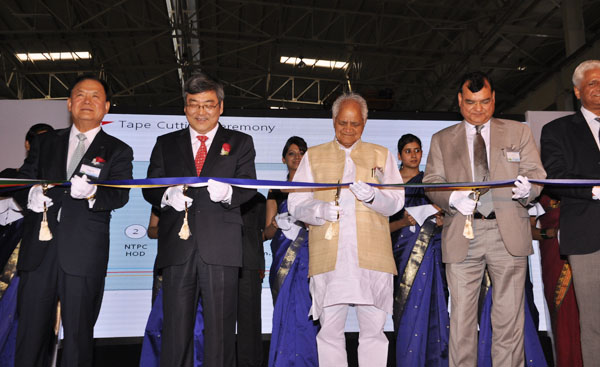 LS Cable & System had a completion ceremony for the first power cable factory constructed in India by a Korean company in Haryana Bawal. LS Cable & System President and CEO Son Jong-ho (left) and other figures are cutting the ribbon.


LS Cable & System has been actively penetrating the global market since the early 1990s and now has 100 operating sites in 24 countries. Designating China, Southeast Asia, Middle East, Russia, the United States and Europe as individual markets, the company has been promoting specialized business and is working to become the No.1 cable maker in the world by 2015.

In the case of China, the company is thoroughly pursuing localization. With the launch of LS HongQi Cable in 2009, it has built a complete business portfolio with existing affiliates in Wuxi, China that produce power cable connectors, bus ducts, automotive cables, and device cables. Its Tianjin, China affiliate produces winding wires, while its U.S.-based SPSX produces winding wires for power transmission. LS HongQi Cable will aggressively target special industrial cable markets, including markets for 220kV plus high-voltage power cables, submarine cables, and cables for railroads, ships and nuclear and wind power plants. In addition, the company is planning to complete the construction of a high voltage cable production VCV (Vertical Continuous Vulcanizing) Tower by November of this year.

In April of this year, LS Cable & System finalized its factory in India, making it the first Korean power transmission company to enter this market. LS Cable & System has invested $35 million in northern India’s Haryana Bawal and constructed an electricity cable factory that produces 220kV power cable and OPGW (Optical Composite Ground Wire). Thus the company is now able to produce $200 million worth of power cable and $100 million worth of communication cable in India annually.

LS Cable & System has been traditionally strong in the Middle Eastern market and the countries in this region are actively promoting electrical grid improvement. The construction industry is showing steady growth, while international bidding is continuing for social overhead capital facilities such as power plants, substations and power cable construction, so LS Cable & System is planning to target this part actively with market surveys, customized marketing of each industrial department and localized R&D activity.

This kind of SI industry strategy will continue in the Southeast Asian market. LS Cable & System has already constructed an information access center and ICT learning center in Indonesia and more recently won the order for the National Police telecommunication cable network.

LS Cable & System is also strengthening its foothold in Europe and the United States. LS has been constructing an electricity cable factory in Tarboro, North Carolina that will begin operations this year. Furthermore, it has secured overseas branches in Brazil and Russia.