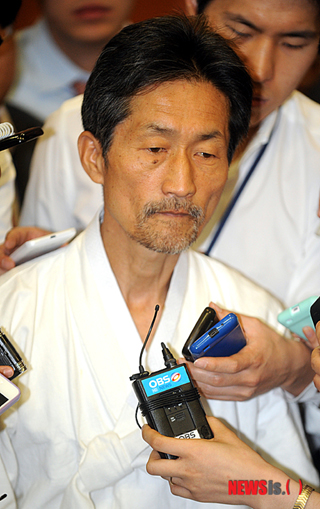 The top priority of the emergency council of the Unified Progressive Party will be the resignation of its 14 proportional representative candidates elected in a rigged primary, Representative Kang Ki-kab, the interim leader of the opposition party, said yesterday.

Kang, the head of the UPP’s emergency council, yesterday held a press conference and announced that the council will begin its reform efforts right away. “Before May 30, I will make sure that the resolution, adopted by the Central Steering Committee, to demand the resignation of the proportional representatives, will be realized,” he said. “Starting today, I will talk with them to pressure them to step down and come up with ways to resolve this situation.”

Yoon Geum-soon, a farmer-turned-politician who won the second most votes in the rigged primary, gave up her proportional representative seat in the upcoming National Assembly, but two others, Lee Seok-ki and Kim Jae-yeon, refused to forfeit their positions.

“While one of them stepped down, the other two resisted, so they became the targets,” Kang said in an interview with the SBS yesterday. “Even if I have to get on my knees, I will persuade them to step down voluntarily as soon as possible.”

Lee and Kim, known as leaders of the largest faction in the UPP, already registered with the National Assembly last month to claim their victories and receive support for their legislative activities.

Even if the party kicks them out, they will be able to keep the lawmaker positions without party affiliation. If they leave the party voluntarily, they will lose their Assembly seats.

As of yesterday, only Sim Sang-jeong, former co-chairwoman of the party, has not registered with the National Assembly, while the rest of the UPP’s 13 lawmakers-elect have done so. Sim won the election in Deokyang A District of Goyang, Gyeonggi, and her victory had nothing to do with the rigged primary.

“She thought it was inappropriate for her to register her name as the lawmaker when the scandal about the rigged primary has not been resolved,” her aide said.

Kang also said in the press conference that an in-house investigation committee will be established to look into the violent melee that took place during the Central Steering Committee meeting on Saturday. Cho Joon-ho, a former co-chair of the party, was injured in the neck. “We will punish the responsible people based on the party’s regulations,” Kang said.

The largest faction in the UPP has boycotted the process of revamping the party in the aftermath of the rigged primary and last Saturday’s melee.

Because they didn’t participate in the formation of the emergency council, the interim leadership is expected to face major challenges from within.

In his SBS interview, Kang denied speculation that the party will name Representative Kim Sun-dong as its new floor leader. Kim, who detonated a tear gas canister inside the National Assembly’s main chamber to protest the ratification of the Korea-U.S. free trade agreement last November, is a core member of the largest faction.

Kang also rejected the largest faction’s argument that the internal probe of the primary was poorly conducted.
By Ser Myo-ja [myoja@joongang.co.kr]