Foreign patients on the rise

Foreign patients on the rise

Earlier this month, a senior Japanese couple - Makoto Hukagawa and his wife Junko, both 65 - visited the Kwangdong Oriental Hospital in Samseong-dong, southern Seoul from Tokyo. They came to receive traditional herbal treatment.

After retiring from work, Makoto enjoyed his golden years in life by playing golf.

But not long after, he started to suffer from a severe backache and shoulder muscle pain. As for Junko, she said she has not been able to sleep due to stress ever since she started spending most of the day with her husband after his retirement.

After diagnosing their symptoms, the hospital brewed a month-worth of herbal medicine for each of them. They paid 1.5 million won ($1,285) in total for the treatment. 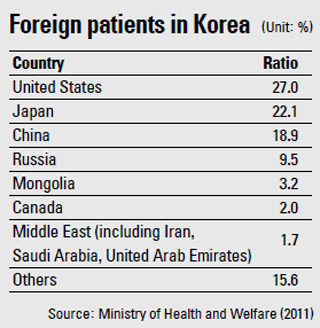 “The couple went back to Tokyo, but we still keep in touch,” said Sung Jin, an official from the hospital. “We [the hospital] ask them about their health conditions and they respond.”

The number of Japanese in their 60s visiting Korean oriental hospitals to receive medical treatment is increasing, boosting the number of overall medical tourists in Korea.

According to a report released by the Ministry of Health and Welfare yesterday on figures related to foreign medical patients in Korea, the number of the so-called Dankai generation in Japan aged over 60 visiting Korea for medical purposes reached 4,511 last year, which is a substantial increase from the previous year’s 1,491.

Those belonging to the Dankai generation are baby boomers born in years between 1947 and 1949 that have mostly retired from work and have money to spend on health treatments and traveling.

“The growth of the number of Japanese patients receiving treatment in Korea is due to various reasons that include the strengthened yen against the Korean won and Hallyu,” said Jung Ho-won, an official from the ministry’s health industry policy department.

“The Dankai generation, in particular, is known to be concerned about their health, especially after the massive earthquake that broke out in eastern Japan.”

Overall, the Health Ministry said yesterday that last year, 122,297 foreigners visited Korean hospitals to receive treatment, which is a 49.5 percent increase from the previous year. Among them, Americans, Japanese and Chinese each made up 27 percent, 22 percent 18.9 percent, respectively.