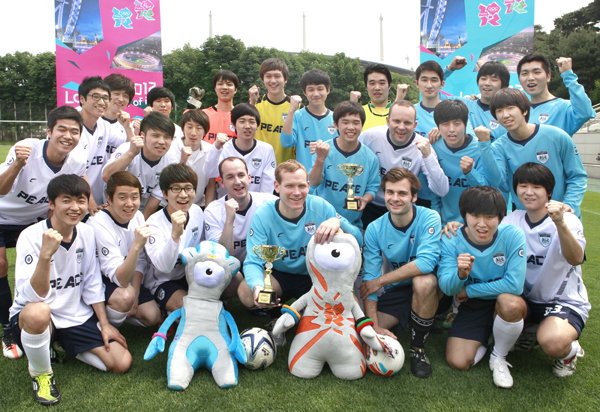 The U.K.’s minister of state at the Foreign and Commonwealth Office, Jeremy Browne, first row fifth from left, joins North Korean defectors and Korean university students for a friendly soccer match at the World Cup Stadium complex in western Seoul yesterday. The match was held to promote the Olympic Truce ahead of the upcoming London 2012 Olympics and Paralympic Games. The mascots Wenlock and Mandeville are also pictured above. By Park Sang-moon


To show support for the Olympic Truce ahead of the upcoming London Olympic Games, the United Kingdom’s minister of state at the Foreign and Commonwealth Office, Jeremy Browne, ran the fields for a friendly soccer match with North Korean defectors and Korean university students yesterday at the World Cup Stadium complex in western Seoul.

While the upcoming London 2012 Olympic and Paralympic Games will commence in July, a soccer match with teams made up of North Korean defector students, Korea University’s soccer club and officials from the British Embassy was held to promote Olympic Truce - a UN-backed resolution that promotes peace and reconciliation through sport.

The minister said, “Sport has the power to bring people together from different countries, cultures and backgrounds without prejudice or discrimination - whether at a global level through the Olympic and Paralympic Games or at a local level through activities like this.”

Nations all over the world are holding Olympic Truce-themed events before the Olympic torch arrives in London this Friday.

The minister, barely out of breath during halftime, said to the Korea JoongAng Daily, “It is very sad the political division of the Korean Peninsula, so this is a very good opportunity for people to celebrate the common humanity and shared human spirit, and we hope the Olympics can help unite the people for greater harmony in Korea.”

After the match, the minister headed off to Korea University to hold a lecture on economic and educational lessons Britain can learn from Korea.

The minister also said “preparations are very good” for the Olympics and that he visited the Olympic Stadium last week, and that it was fully completed.

“I don’t look like a defector, do I?” Song asked with a chuckle. He was visiting his aunt in China when she helped him come to the South at the age of 12.

Song arrived in Korea alone as an elementary school student, but he always loved sports and was able to make friends easily through soccer. Though he sported a hip injury from another soccer match, there was no sign of a limp when he ran. “I want to go to the London Olympics, so being able to participate in an event like this is pretty amazing in itself,” he said.

Another participant, Heo Hyeon-min, came to the South with his family three years ago and is a part of the same 30-member North Korean defector student soccer team called K1FC which signifies "One Korea Football Club.”

“I hope after I graduate from college that the two Koreas will be reunified, and I can go back North with my family to see my friends.”