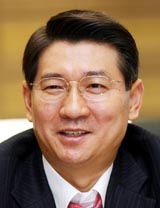 The joint investigation team of the Supreme Prosecutors’ Office said yesterday that it arrested Lim at his residence in central Seoul at around 10:40 p.m. on Tuesday for questioning.

Lim, 50, is accused of embezzling 17 billion won ($14 million) and also giving out 150 billion won in illegal loans. Industry sources say that the team also arrested Lim out of concern that he may try to hide evidence related to his allegations, as he is suspected of having contacted other officials of the Solomon Savings Bank that were questioned by prosecutors recently.

Solomon is one of four savings banks suspended from operations this month by the Financial Services Commission, along with the Korea Savings Bank, Hanju Savings Bank and Mirae Savings Bank. Solomon is the industry leader with 4.5 trillion won in assets.

It is the third time since last year that the financial regulator has suspended savings banks that failed to meet the capital adequacy ratios recommended by the Bank of International Settlements standards.

After the suspensions were announced, prosecutors immediately launched a third round of probes into the executives and major shareholders over possible financial irregularities.

The joint investigation team is expected to question Lim about the alleged illegal loans and the volume of money he withdrew in total from customer deposits and where he used the illegally obtained money.

He is currently suspected of having created a slush fund by keeping two separate account books when he purchased an overseas shipping company and a securities firm in which the bank invested 200 billion won. He is accused of pocketing the profit difference from the two accounts - roughly totaling 10 billion won.

Prosecutors are expected to widen their investigation into Lim and the possible relations he has had with government officials and politicians based. Lim is known for his large personal connections and networks. Prosecutors are looking into whether the company money was misappropriated to lobby politicians.