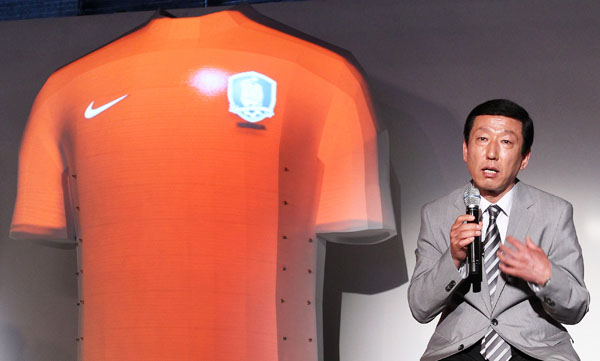 Manager Choi Kang-hee announces the 26-man roster for the upcoming friendly versus Spain and final round of the Asian qualifiers for the 2014 FIFA World Cup. Park Chu-young, the Arsenal striker who saw little time on the pitch this season, was excluded from the squad.[YONHAP]


When Choi Kang-hee, manager of the Korean national football team, announced the 26-man roster for the upcoming friendly versus Spain and Asian qualifiers for the 2014 FIFA World Cup, one prominent name in Korean football was left off the list.

Park Chu-young, the Arsenal striker who has been at the center of controversy after a move that will leave him exempt from military service, will not be representing Korea in the near future.

Choi announced the team’s roster at the LG D Square in Nonhyeon-dong, southern Seoul, yesterday. The biggest issue for the team was whether Park, one of the country’s most lethal offensive threats and the former captain of the Taegeuk Warriors, would be included after accusations of avoiding military service.

Park was granted a 10-year prolonged stay by Monaco while he was playing for AS Monaco FC from 2008 to last year. Park told fans that he chose pursue the extended stay in order to play football in high-quality European leagues and affirmed that he will serve in the Korean military after his career is over.

But many Korean fans saw this move as an attempt to avoid his military responsibility because staying overseas until age 37 means that he will be exempted from the 21-month duties. The criticisms put pressure not only on Park, but on manager Choi as he assembled the national squad.

“Park should explain his decision regarding the military issue,” manager Choi said during a press conference held on Monday. 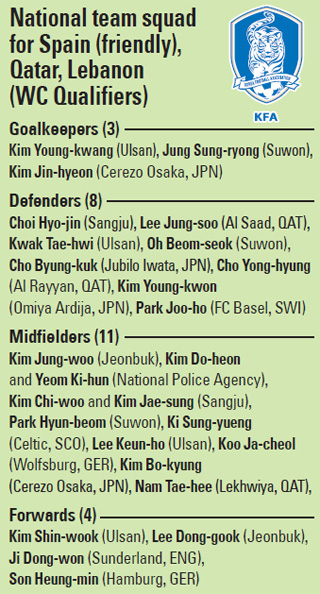 The Korean Football Association (KFA) had also been organizing a press conference for Park before Choi chose his 26 players, but Park suddenly disappeared over the last few weeks. The KFA said it has no idea about Park’s whereabouts, not even whether he is in Korea or overseas.

This eventually led Choi to pass on Park in the team’s most important stage of World Cup qualification. The next few months will decide whether Korea is going to be in Brazil in 2014.

“I can’t deny that my biggest worry was about Park when I built the team for the final round of the World Cup qualifiers,” Choi said during a press conference. “I have discussed with the coaching staff and officials of the KFA.”

Choi said that he might reconsider placing Park on his roster in the future. “Park is still a huge part of the team,” Choi said. “We have important matches in September and October. The door is always open for Park.” .