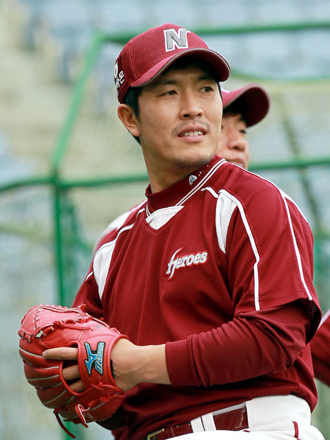 Nexen Heroes pitcher Kim Byung-hyun, the only Korean with a World Series ring, will make his first start in the Korea Baseball Organization tonight.

Heroes manager Kim Si-jin said on Wednesday that Kim, who won the MLB title with the Arizona Diamondbacks in 2001 and the Boston Red Sox in 2004, will be start on the mound against the Samsung Lions at Mokdong Stadium, western Seoul.

The 33-year-old submariner, who will debut as a starter in the KBO after playing in MLB and Japan’s Nippon Professional Baseball with the Tohoku Rakuten Golden Eagles last year, already made his first KBO appearance against the LG Twins on May 8.

He came on as a relief pitcher while the Heroes were trailing the Twins 7-2 and pitched only one inning, in which he allowed one run on three consecutive hits. He has started on the mound with the Heroes’ minor league team, but this will be the first time his first in the top division.

“I’m half excited and half worried,” Kim said. “I will pitch with the mindset that I will defend one inning at a time.”

The former MLB All-Star was scheduled to feature one last time on the mound during the three-game series against the SK Wyverns last weekend before earning a start, but since those games were so tight, he couldn’t leave the bullpen.

But Kim said he is already set to pitch from the first inning.

“I knew I would be a starting pitcher someday, so I’ve been preparing myself,” Kim told reporters on Wednesday. “I’m trying my best to keep a good rhythm for [tonight’s] game.”

Kim will start against the defending champion Lions. The Daegu-based club added Lee Seung-yeop, who has Asia’s home-run record in a single season with 56, to their lineup. But the MLB All-Star said he’s not afraid of the Lions’ formidable batters.

“Not only Lee, but all the Lions’ batters, including Kim Sang-su, Park Seok-min, Park Suk-min, are hitting well,” Kim said. “But I will not avoid them.”

The pitcher, who has 54 wins, 60 losses and 86 saves over nine seasons in MLB, has been working on his split-finger fastball, also known as a splitter, to add more flavor to his pitch. Pundits say that if his splitter works well, it will be an efficient weapon against left-handed hitters like Lee.

The Lions were also hyped up about the matchup against Kim. The 36-year-old veteran slugger Lee, who told reporters that he is facing Kim for the first time in 18 years since high school tournaments, said that he is excited to meet Kim. Manager Ryu Jung-il said he will send 2004 KBO MVP Bae Young-soo to the mound for a pitchers’ duel.

“His arm isn’t like old days, but for fans, Kim’s return is a big gift,” said Ryu, who coached Kim during the 2006 World Baseball Classic. “I hope he pitches well.”

While everyone’s eyes will be on Kim, there is one person that the submarine pitcher wants to see in the stands.

“My wife wants to come to the stadium, but she hasn’t yet confirmed,” Kim said. “I’m excited to pitch in front of my family.”
By Joo Kyung-don [kjoo@joongang.co.kr]