At Cannes opening, media grill jury on lack of women

At Cannes opening, media grill jury on lack of women 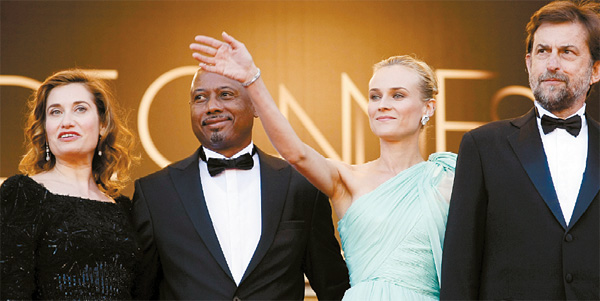 Jury members from left, Emmanuelle Devos, Raoul Peck, Diane Kruger and director and jury president Nanni Moretti, stand at the top of the steps during the opening ceremony and screening of “Moonrise Kingdom” at the 65th international film festival in Cannes, southern France, on Wednesday.[AP/YONHAP]


CANNES, France - The Cannes Film Festival opened on Wednesday with a sweet-natured family romp by Wes Anderson, as women jurors spoke up to quash a row over the all-male lineup for the competition.

The film is the first of 22 vying for the Palme d’Or top prize.

Earlier Jessica Chastain and Eva Longoria shimmied up the steps of the seafront festival palace, first of a glamorous roll-call of stars expected in town including Nicole Kidman, Marion Cotillard and Kylie Minogue.

But the jury led by Italian film-maker Nanni Moretti came in for a grilling over the lack of women behind the camera this year, with none in the main competition and just two in Cannes’ new talent section dubbed Un Certain Regard.

British director and juror Andrea Arnold told a news conference it was “a pity and a great disappointment” that so few women went into film-making, but argued that Cannes simply “represents how it really is out there in the world.”

She said she herself would “hate” to be invited on grounds of gender.

“I would only want my film to be selected for the right reasons - not out of charity because I’m female or anything,” said Arnold, whose first two feature films - “Red Road” and “Fish Tank” - both won the Cannes jury prize.

Arnold’s fellow juror Diane Kruger also denied any sexism at Cannes: “On the contrary, my impression is that women are welcome here. It just so happens that there aren’t any this year.”

New Zealand’s Jane Campion is the only woman to have won the Palme d’Or for “The Piano” in 1993, but last year’s festival raised hopes of a breakthrough, with an unprecedented four women in competition.

Among the European giants, Austria’s Haneke will show “Amour,” starring France’s Isabelle Huppert as the daughter of a woman who suffers a stroke.

And Palme d’Or-winning Iranian Kiarostami returns at 71 with “Like Someone in Love,” a Japan-set tale about a student who works as a prostitute. AFP