When Kim Jung-tai took over as chairman and CEO of Hana Financial Group in March, he laid out his ambition of targeting retiring baby boomers - part of his stated goal of making the group, which recently swallowed up Korea Exchange Bank, a global top 50 player.

“The market for products and services for retirees is getting bigger as baby boomers are now approaching that age where they want to stop working,” Kim said. “We need to prepare by developing software [for products] specifically targeting them.”

Hana is not the only financial firm setting its sights on this increasingly lucrative niche market.

Korea has for years been a rapidly aging society, with five million or 11 percent of its population aged 65 or over as of 2010. This is a sharp increase from 9 percent just five years ago.

The number is expected to explode in coming years as the nation’s 7.12 million baby boomers, or people born between 1955 and 1963, have already hit or are fast-approaching retirement age. Baby boomers make up almost one in seven of the population. 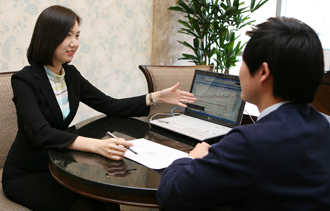 A man receives a consultation about preparing for retirement at a Woori Investment and Securities branch in Seoul. Provided by the company

The market for retirees, which comprises personal and retirement pensions, is expected to expand from 200 trillion won ($172.1 billion) this year to more than 700 trillion won in 2020, according to a study by Woori Investment and Securities. If related financial products such as deferred funds are factored in, the market is tipped to surpass 970 trillion won in eight years.

Financial industries see this as a golden opportunity, with banks, brokerage firms and insurance companies now aggressively setting up research labs that not only design financial products catering to the needs of baby boomers, but also offer consulting services.

Brokerage firms were the first to pounce on the market. Mirae Asset Securities set up a research lab specializing in pensions in 2005, and companies like Samsung Life Insurance, Woori Investment and Securities and KDB Daewoo Securities soon followed suit.

Banks began jumping on the bandwagon this year. Shinhan Bank, which assembled a special team of researchers in January, has been offering consulting services to those preparing for lives of leisure.

KB Financial Group is planning of setting up a research lab of its own within its management research department in the first half of this year. Its main affiliate, KB Kookmin Bank, launched a retirement planning service in March and vowed yesterday to have 40 retirement planning specialists by the end of the month.

Furthermore, it said that 1,200 employees at its branches will be able to present and explain a smorgasbord of tailor-made retirement solutions suited to customers’ financial situations within months. The products will also be available online and even on mobile apps, it added.

“As our society grays, demand will grow for long-term financial products that can facilitate stable spending instead of just trying to accumulate wealth.”

Market experts say many retirees at present are facing high-risk situations as the bulk of their personal holdings are concentrated in real estate.

According to a study by KB Financial Group, half of the baby boomers are not - nor will be - able to meet half of the minimum living expenses needed after retirement, with one in four considered to be in financial dire straits. Only 12 percent of the total have, or will have, accumulated enough wealth to live what is considered a comfortable life after they stop working.

The research center found that Korean retirees need 360 million won to meet their minimum needs after they stop working, or 540 million won to live comfortably. This is calculated based on a person retiring at the average age of 55 and living for a further 27.6 years.

“At this stage, measures by both the government and individuals to help baby boomers live a stable life free of financial difficulty after they retire are insufficient,” said an official at KB Financial Group. “To minimize the shock we will face when more of them retire, the government needs to play a more aggressive role, such as presenting measures to help increase household incomes or expanding the number of years they can work.”

Baby boomers have further put themselves in jeopardy by tying their money up in real estate - an investment seen as foolproof before the market hit a protracted purple patch - meaning they are in possession of assets that are difficult to liquefy quickly when the pinch sets in.

According to studies by Korea Statistics and the research center of KB Financial Group, the average personal holdings of baby boomers stand at some 340 million won. But over 76 percent of this was found to be invested in real estate, with financial assets taking up less than 20 percent. Older people tended to have even more of their funds tied up in property.

“Downsizing the real estate [holdings] for retirees who have no actual source of income would be the ideal way of managing their living expenses,” said a retirement expert at Standard Chartered Korea.

The local real estate market has barely improved since it contracted suddenly in the wake of the 2008 credit crunch.
By Lee Ho-jeong [ojlee82@joongang.co.kr]