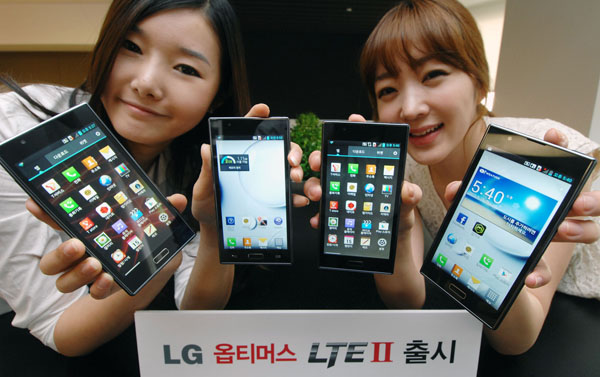 
LG Electronics, the world’s third-largest cell phone producer, has set a goal to focus on “premium-quality” growth and will not “worry too much about how many handsets we sell,” the head of its mobile-phone business said yesterday.

“We won’t obsess about shipment figures,” Park Jong-seok said at a press conference in the wake of the launch of the Optimus LTE2 Smartphone at the company headquarters.

Park reiterated the company’s target of shipping 80 million units this year, and 35 million will be smartphones.

The 80 million goal is 8.1 million units fewer than sales last year, although the number of smartphones shipped will be 14.8 million more than last year.

“Our first-quarter sales have failed to meet our expectations but since we have launched new handsets the situation is improving in the second quarter,” Park said.

Optimus LTE2, with a 4.7-inch screen and an eight-megapixel camera, will be available through all three telecom carriers beginning today.

With a price tag of 935,000 won ($804), the phone has the “quick memo” feature that was introduced on the five-inch Optimus Vu Smartphone released in March.

The feature enables users to capture screen shots, write memos and draw on them.

LG has no plans to launch the product overseas at present, Park said, because LTE connections are available in only a few countries.