The bidding war for Hi-Mart is growing in ferocity as another conglomerate, SK Networks, officially joined the fray on Wednesday in hope of obtaining the firm that is still scarred by last year’s management disputes.

Market watchers predicted earlier that the competition to acquire Korea’s largest electronics appliance retailer would end up a two-horse race between Lotte Shopping and E-Mart, which is owned by an affiliate of Shinsegae.

Lotte Shopping and Shinsegae each controls their own electronics appliance outlets inside Lotte Mart and E-Mart.

“With SK Group having thrown its hat in the ring in alliance with its affiliate SK Networks, the competition is now coming to a boil,” said an industry source. “This is clearly not a welcoming news for both Lotte and Shinsegae.”

SK Networks has its hand in fashion and energy businesses, among other interests. It also sells communications devices. IM Company, which serves as the affiliate’s information and communication technology marketing bureau, raised 6.38 trillion won ($5.48 billion) last year to account for 23.1 percent of its total sales.

“Acquiring Hi-Mart would give the group a new growth engine,” an official at SK Networks said.

According to sources at securities firms and related industries, Citi Group Global Markets, the overseer of the bid, has received letters of intent (LOI) from either six or seven companies, including foreign private equity funds. GS Retail and Homeplus formerly showed interest but later backtracked.

A preferred bidder will be announced in June.

M&A market experts estimate that Hi-Mart will eventually sell for around 1.25 trillion won.

“Lotte tends not to bid extravagantly for firms, even if they are in excellent condition,” said an official at the company. “However, it is Lotte that can generate the best synergy effect. If the price is reasonable, we will probably go for it.” 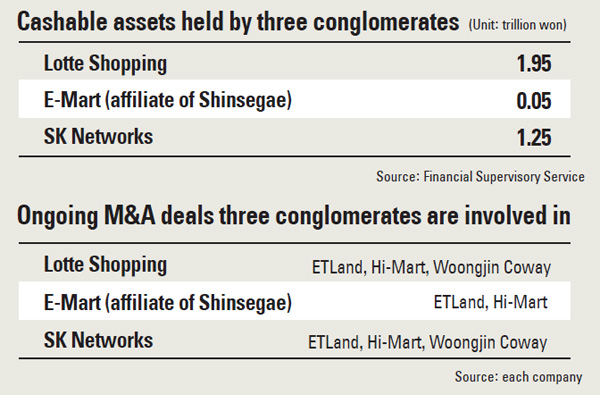 A total of 65.25 percent of Hi-Mart’s shares are on the table. They are owned by Hi-Mart founder and CEO Sun Jong-koo and Eugene Group Chairman Yu Kyung-sun, as well as a number of other investors. Sun and Yu became involved in acrimonious managerial disputes last year.

The Hi-Mart deal remains attractive to conglomerates despite it having been delayed by the prosecution’s probe into the company’s executives for wrongdoing.

Prosecutors in April indicted both Sun and Yu without detention on charges of embezzlement and misappropriation, respectively.

However, Hi-Mart is still the considered peerless and without rival in the domestic electronics industry. The firm runs 306 outlets and raised 3.4 trillion won in sales in 2011.

It controlled 34.9 percent of the market in 2010, followed by Samsung Electronics’ Living Plaza (20 percent) and LG Electronics Hi Plaza, also known as Bestshop (14.8 percent), according to Euromonitor International, a London-based market research firm.

Meanwhile, all three conglomerate bidders have also expressed interest in acquiring ETLand, another electronics appliance retailer that is up for sale.

“Neither Lotte nor Shinsegae were originally interested in acquiring ETLand, but they changed their minds because they figured they need to prepare all eventualities, including their potential failure to pick up Hi-Mart,” said an analyst at a local investment bank.

“The ETLand deal will work out to be cheaper than Hi-Mart, and the conglomerates figured that they can reap higher profits after they improve its management system.”